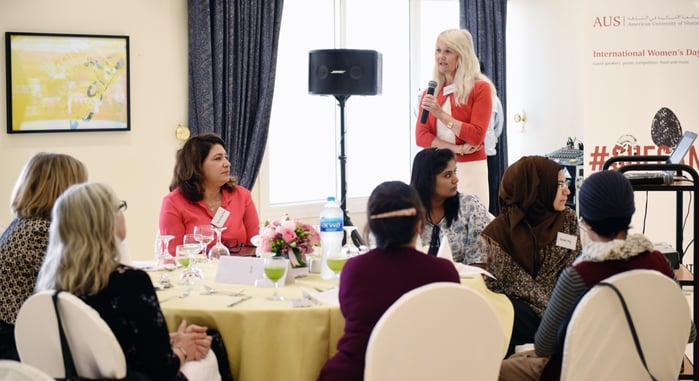 International Women's Day is celebrated on March 8 every year. It was originally started to commemorate the movement for women's rights. Nowadays, the event celebrates the social, economic, cultural and political achievement of women.

A special luncheon was held at the AUS Main Building on Wednesday, March 8, to celebrate women and it was attended by some AUS administrators, faculty and staff, as well as the AUS Chancellor Dr. Björn Kjerfve. The lunch was organized by Dr. Linzi Kemp, Associate Professor of Management at the university’s School of Business Administration (SBA); Linda McLoughlin, Senior Lecturer of Marketing and Placement Director at SBA; and Dr. Tania Kjerfve, wife of Chancellor Kjerfve.

The event commemorated the Middle East's increase in the recruitment and promotion of women in organizations. Participants discussed ways in which women can become more successful in the business world.

The celebration called for people in society to "be bold for change" in line with this year’s International Women’s Day theme.

Dr. Tania Kjerfve said that the UAE supports women in the highest positions in political life, as eight of the 29 ministers in the current UAE cabinet are women, one of which is an AUS alumna, Her Excellency Sheikha Lubna Bint Khalid Al Qasimi, UAE Cabinet Member and Minister of State for Tolerance.

Dr. Kemp, Ms. McLoughlin and Dr. Norita Ahmed, Associate Professor of Management Information Systems, spoke about their project the Women and Leadership portal, which features The Expert Woman List, the first of its kind media database of female experts and leaders in the United Arab Emirates. Click here to read more about this project.

The School of Business Administration's Women in Leadership (MGT 321) class, taught by Linda McLaughlin, collaborated with the Intermediate Digital Media in Mass Communication (MCM 200) class of the College of Arts and Sciences, taught by Ana Gavassa, to organize a poster competition illustrating International Women's Day.

According to organizers, the theme of the competition was "Empowering Women and Girls Around the World."

Mass communication student Yasmien Peck was announced the winner of the contest on March 7. Peck said that she wanted to create a poster in which she could portray women’s strength in “crushing” the stereotypical things said about them.

“I thought about all the things I have heard males around me say about women, and that inspired me to make a poster that would show us stepping on these stereotypes,” she said. Peck won a prize of AED 700.

The event was led by Dr. Nawar Golley, Professor of English, who discussed the issues regarding gender equality and feminism.

Dr. Golley said that AUS is the perfect environment to engage, speak, and respect one another, in order to achieve the society that enables gender equality.

Two students also performed a gender role reversal play that portrayed men in the position of women in Middle Eastern societies. The man was asked to cook, clean, and prepare for marriage, while the woman was talked about in a more notable manner. The students were attempting to emphasize the different ways men and women are talked about in the Arab society.

Diana Farah is a student at American University of Sharjah.