The faculty members at the American University of Sharjah (AUS) have time and again displayed, through their work, their expertise and knowledge in various fields. Rather than simply explaining how our education can be put to use in real life, AUS professors demonstrate and inspire the students through their work and provide us with a better understanding of various subjects. Dr. David Lea, Professor of Philosophy in the Department of International Studies of the AUS College of Arts and Sciences, is one such professor. He recently launched his book Neoliberalism, the Security State and the Quantification of Reality (Lexington Books, Rowman and Littlefield) at an event at American University of Sharjah. The book is the most recent major book in the humanities/social sciences published by an AUS faculty member.

The idea for the book developed two years ago when Dr. Lea realized that the various articles that he had published for journals had a common theme and that he had enough material to turn them into a book. After expanding on these articles and adding more chapters, he formed the book. Neoliberalism, the Security State and the Quantification of Reality, is targeted at university students and aims to provide them with a better understanding of what’s going on in the world right now in terms of finance, higher education, professional practice, international relations and security issues. Dr. Lea’s book is also aimed at policy makers and faculty members, such as philosophers, political scientists and sociologists.

The book covers a range of contemporary issues including those related to higher education, science, professional practice, financialization, state governance, relations between the West and the Islamic world, terrorism and the state security. According to Dr. Lea, within all these areas one encounters problematic forms of human interaction which we seek to correct and improve. In his book, Dr. Lea also argues that humans, in their efforts to correct society and other social relationships, have become overly reliant on a form of problem solving narrowly focused on gathering statistics and applying mathematical formulas. He states that unfortunately this has resulted in systems that purport to represent reality but which are actually detached from and unconnected to the realities of social and environmental life.  The book demonstrates how policies based on such systems have not only failed but have also distorted our collective existence and our ability to deal with pressing social and environmental issues. 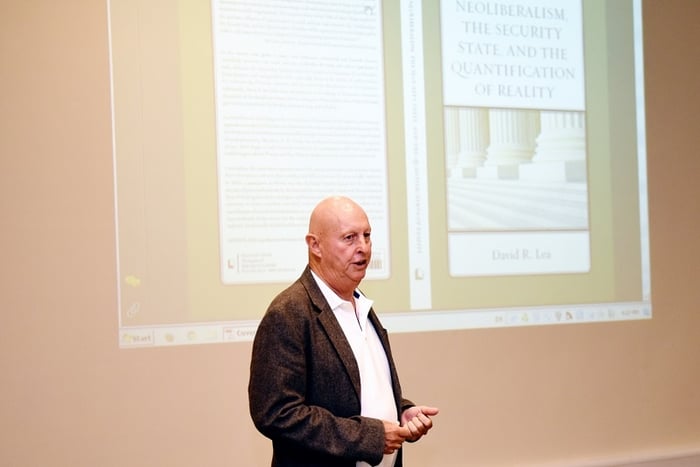 According to Michael Power, author and distinguished professor at London School of Economics, "Neoliberalism, the Security State and the Quantification of Reality will be of great interest to sociologists, policy makers, and many others since it deals with the most pressing questions of our time."

We are fortunate to have faculty members at AUS who continue to inspire us both within and beyond the classrooms through the tremendous work they do and through their remarkable achievements. Good luck to Dr. David Lea with his current and upcoming projects.