Forensic science is “any aspect of science that deals with law,” Brigadier General Abdel Qader Al Amri, Director of the Forensic Laboratory of Sharjah Police, said to students and faculty during his lecture at American University of Sharjah (AUS) on Monday, September 25.

Al Amri’s seminar, titled “Introduction to Forensics: From Crime Scene to Court,” was part of the Forensic Science Experts Seminar Series offered by the Department of Biology, Chemistry and Environmental Sciences at American University of Sharjah. The series aims introduce students, faculty and staff to practical and theoretical experiences in the forensic science field.

“We do examinations, data collection,” Al Amri said. “From the analysis we do, we have to make inferences, and then come to conclusions put into a report.”

One of the skills a forensic scientist must have is the ability to write reports that are free of jargon and “clear to a layperson,” he said. “Reporting is very important.”

Al Amri said that crime scene investigation is challenging, and that an investigator should not expect to always find fingerprints or biological samples leading to a full DNA profile. “You have to deal with it,” he said. “You have to be able to adjust things together.”

He said forensic scientists should work according to what he called the “GIFT principle,” meaning “Get it the first time.”

“You don’t have to go back to the scene two, three times,” he said, “and you don’t know who tampered with it.” 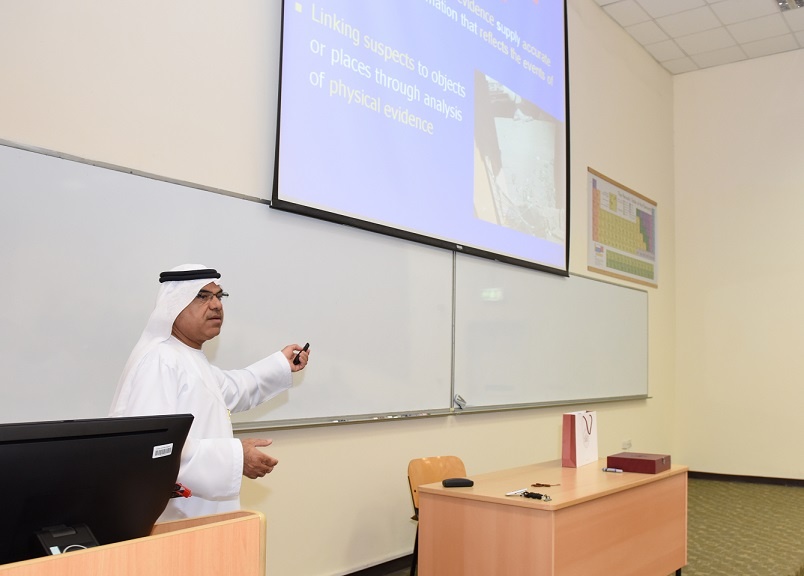 Al Amri spoke on how forensic scientists solve various cases, including robberies, homicides, and instances of fraud and arson. “In arson cases, the point of origin is important,” he said. “If you get the point of origin, then you have solved 50 to 80 percent of the problem.” He said signs of arson include fires with multiple points of origin, and fires with little smoke.

Another example involved a hit-and-run crash that killed a man. He said investigators found the suspect’s car and determined that the pieces of glass found in the crime scene matched the glass of the car window, and also completed the matrix of broken pieces. He said they also found strands of fiber from the victim’s clothes under the car. Al Amri said the evidence led to the suspect’s conviction.

American University of Sharjah established a partnership with Sharjah Police Forensic Laboratory and Dubai Forensics Science and Criminology Department to introduce the AUS community to forensic science and demonstrate how science can help solve crimes.

“Colonel Al Amri will return to American University of Sharjah to conduct another lecture on November 13. Dr. Fuad Tarbah, Director of Training, Research and Development Department at Dubai Forensics Science and Criminology Department, will also visit the AUS campus on October 4 and 16 as part of this AUS Forensic Science Experts Series,” said Dr. Yehya El Sayed, Associate Professor of Biology, Chemistry and Environmental Science at American University of Sharjah.

Ahmad Khalid is a Mass Communication student at American University of Sharjah.