The road to launching Nayif-1, the UAE’s first nanosatellite 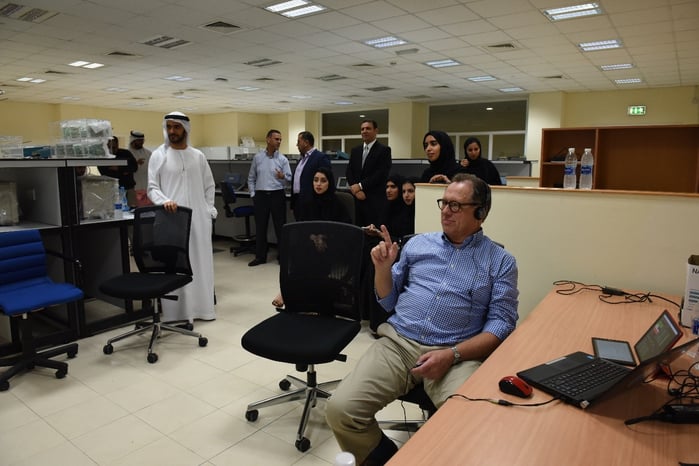 Back in March 2014, American University of Sharjah was approached by what was then known as the Emirates Institute for Advanced Science and Technology (EIAST) and now known as the Mohammad Bin Rashid Space Centre (MBRSC) to embark on an exciting project. We were very proud of the fact that among all universities in the country, AUS was chosen as the academic partner for this ambitious project. Our student would build the UAE’s first nanosatellite and launch it into space!

Intensive discussions followed over the summer of 2014 and the project kicked-off in September 2014 as a senior-year design project for a group of seven Emirati engineering students supervised by engineers from MBRSC and seven faculty members from the AUS College of Engineering. The students—who came from the electrical engineering, mechanical engineering and computer engineering programs—were very excited to be selected for this project and worked diligently to learn more about CubeSat technology, which was to be used for the project because the size of the nanosatellite is practical for scientific investigations. Although a CubeSat is a small satellite with a basic size of 10 x10 x 10 cubic cm and weight of 1.3 kg, it has all the functionality of a conventional satellite. It was amazing to see how well the students progressed as they identified the mission and the different parts to be included in the design. The students went through different formal design reviews with MBRSC and the technology partner, Innovations in Space from the Netherlands. They even went to the Netherlands for training on CubeSat technology. It is impressive that the team members were full-time students taking at least five courses along with their design project, for which they had to meet the university requirements for project deliverables within specific deadlines.

After many iterations of design, simulation, integration and testing, it was finally announced that Nayif-1 was ready. Nayif-1 was chosen as the name for the CubeSat since in Arabic it means to fly high or to ascend in the sky. The students defended their project for graduation by the end of Spring 2015. However, the process was not over yet; there were major activities to be done, including testing for flight readiness and launching the CubeSat on a space rocket to be placed into orbit. They also had to work on the installation of the ground station at AUS to be able to control and monitor Nayif-1.

Following graduation, the students became engineers and four of them joined MBRSC working on different projects, but they did not abandon their original baby, Nayif-1. The moment of truth came on February 15, 2017 at 7:58 in the morning (UAE local time), when a rocket in India carrying Nayif-1, along with a world record of 103 other satellites, was launched into space. Nayif-1 team members came to the ground station room at AUS to watch the launch and then take over the control of the CubeSat. Everyone was holding his/her breath, and when the control room announced the successful deployment of Nayif-1 at an altitude of 500 km above the ground, a loud cheer was heard from the crowd at AUS. The CubeSat has to orbit the Earth at a speed of about 7.5 km per second, and it was due to be within the coverage range of the AUS ground station 90 minutes after launch. The team worked to finalize the setup of the ground station programs to be ready to receive the signals from Nayif-1. The crowd was so quiet, wondering if Nayif-1 could actually communicate with the ground station. And then it came: at 9:30 a.m. UAE local time, the first “beep-beep” was heard from the ground station speaker. This was the moment everyone was waiting for: Nayif-1 was successfully operating. It was a very joyful and proud moment for the team members and their mentors knowing that they had made history. Shortly after, text messages that had been preloaded into Nayif-1 started to appear on the screen informing the world about the creation of the CubeSat by AUS students, which was the first nanosatellite in the UAE and the GCC region. After another 90 minutes, Nayif-1 passed into range of the AUS ground station again. This time, the signal was even stronger and text messages in Arabic were sent from the ground station to Nayif-1 to be broadcast as it was circulating around the globe. The messages were received by amateur radio users in the US, Europe, Mexico, Canada, Estonia, Japan and many other places.

This has been a truly amazing experience for me as a lead advisor of the project at AUS. There are many success stories to tell. First, the successful design, testing and launching of the first CubeSat in the region by AUS students is a major achievement. Second, this project successfully demonstrated that a true partnership between academia and industry/government organizations could result in tangible and fruitful outcomes. Finally, but most importantly, seeing our AUS students grow and develop advanced knowledge and skills relevant to the real-world that make them ready to make an impact as they join the workforce is the real fruit of this project. They did not just learn technical skills, but they have acquired and applied teamwork and project management skills, developed the ability to work under stress and meet deadlines, and become holistic engineers who see the full picture as opposed to focusing on a very small part of the project.

I would like to acknowledge the Nayif-1 team members and their mentors:

Dr. Mohamed El-Tarhuni is Associate Dean for Graduate Affairs and Research at the College of Engineering (CEN), and Professor in Electrical Engineering at American University of Sharjah.