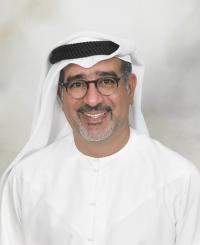 Prior to his appointment as CEO UAE, Mr. Sharaf was the CEO Personal Financial Services, Middle East and North Africa, and responsible for all of HSBC’s Retail Banking business in the MENA region. He was also a board member of HSBC Bank Middle East Limited (HBME), HSBC Saudi Arabia Limited (IBSA) and Emirates Telecommunication Company (Etisalat).

Mr. Sharaf is a graduate of the University of Denver, USA.