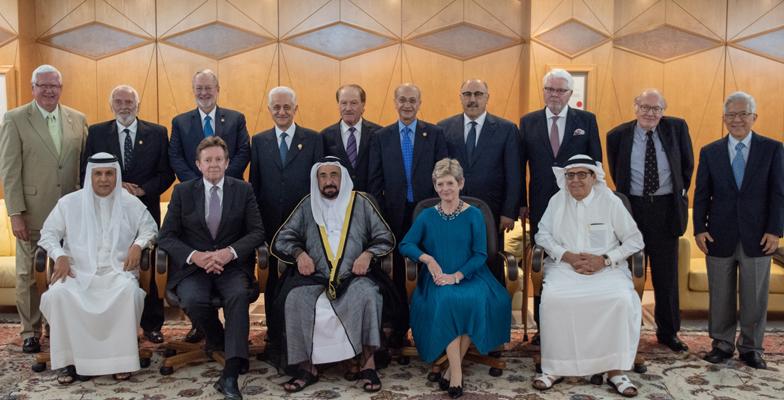 His Highness Sheikh Dr. Sultan bin Muhammad Al Qasimi, Supreme Council Member, Ruler of Sharjah and President of American University of Sharjah (AUS), approved the proposal for the Master of Science in Construction Management (MSCM), during a meeting of the university’s Board of Trustees held at the university on Wednesday, May 30.

As Chair of the AUS Board of Trustees, the Sharjah Ruler also reviewed and approved a number of other important resolutions presented during the meeting and expressed satisfaction at the growth and development of the university and the progress it is making with regards to its future plans. His Highness also thanked the board members for their hard work and support.

“As AUS moves towards realizing His Highness’s vision of becoming the region’s premier research university, we are very pleased to add another degree to our growing roster of graduate programs. The new Master of Science in Construction Management is in response to the regional demand in this field. Our graduate programs reflect the societal and industrial needs of the Gulf and the greater Middle East.

“On behalf of the board, I would like to extend my gratitude to His Highness Sheikh Dr. Sultan bin Muhammad Al Qasimi for his continuous guidance and leadership. I would also like to thank, on behalf of the AUS faculty and staff, all the other members of the AUS Board of Trustees for their support.

Apart from approving the proposal for the MSCM degree, the board also approved a number of other important resolutions, including the conferral of the honorary title of Professor Emeritus for Dr. Ali Sayfy and Professor Emerita for Dr. Fatima Badry.

The board also approved awarding rolling four-year contracts to a number of faculty members, as well as approving a number of faculty promotions. It also approved the operating budget for Fiscal Year 2019 as recommended by the Financial Affairs Committee, and agreed that very accomplished research faculty may be hired with a rolling contract upon arrival, if approved by the Board and His Highness the Ruler of Sharjah.