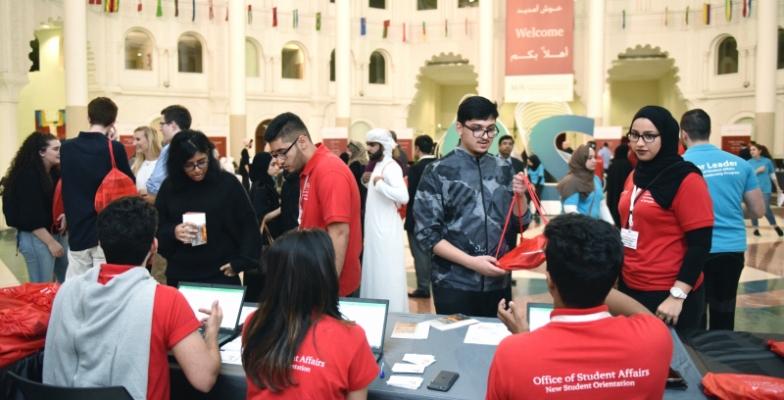 New students who will be joining American University of Sharjah (AUS) as freshmen were welcomed to an orientation session held at the AUS Main Auditorium, yesterday night, January 12. The event, which precedes an orientation week, is aimed at giving the incoming freshmen a comprehensive understanding of the university and to acclimate them to life at AUS. The enrollees comprise the top 20 percent of their high school classes and will begin attending classes when the Spring 2018 semester commences on January 21.

During the session that marked the start of the university’s Orientation Week, AUS Acting Provost and Chief Academic Officer, Professor Kevin Mitchell expressed his appreciation of the hard work the freshmen had put in to join the university, stating that they are among the top percentile of their high school graduating class. He said:

“In 1997, His Highness Sheikh Dr. Sultan bin Muhammad Al Qasimi, Member of the Supreme Council of the United Arab Emirates and Ruler of Sharjah, founded AUS, the region’s leader in higher education, known for excellence and innovation in teaching, learning, research and service.”

“The fact that you have been accepted into American University of Sharjah is an accomplishment to be proud of, and I hope that it is the first of many successes that you will experience during your time at AUS.

Speaking about the university’s multicultural campus environment, Professor Mitchell said: “The diversity of AUS students and faculty is one of our greatest strengths, and I urge you to take advantage of all that a multicultural educational environment can offer to expand your knowledge and make connections to your fellow students through student organizations, sports teams, and informal interactions while walking to class.”

The incoming freshmen cohort for the semester comprises more than 200 bright and talented young men and women ready to begin their university life. As part of its mandate, the university is set to offer them a challenging and stimulating academic environment along with increased financial assistance and support in the form of grants and scholarships to help them through their academic journey.

This year, nearly 40 international exchange students from countries as diverse as Bahrain, Armenia, China, the Dominican Republic, Germany, Italy, Kyrgyzstan, Mali, The Netherlands, Sweden, the United Kingdom, and the United States among others will also be joining the university. AUS is known throughout the region for its multicultural campus environment, with more than 95 nationalities comprising its student body.

Executive Director for Enrollment Management, Ali Shuhaimy also welcomed the new students and their parents to the session and congratulated the students on beginning the next phase of their academic career. Addressing the parents, he said:

“We appreciate the confidence you have shown in our university by choosing to enroll your daughter or son at AUS. I want to assure you that you have made the right choice. AUS is not just another university. We are an institution that prides itself in being recognized as a leading university in the region.

“Our commitment to the success of our students is evidenced by their achieved stature in the community. Our graduates enjoy the advantage of being in the forefront of employers’ selection. Moreover, their demonstrated competencies at the work place, resonates well with the remarkable ranking position AUS achieved in a short period of time. Today, AUS is ranked among the best 420 universities in the world as assessed by QS organization,” he added.

A week-long schedule of on and off campus festivities and events has been organized for the new students, including a dinner reception and library tour, Sharjah and Dubai city tours, games at the Student Center and awareness sessions for parents and students.