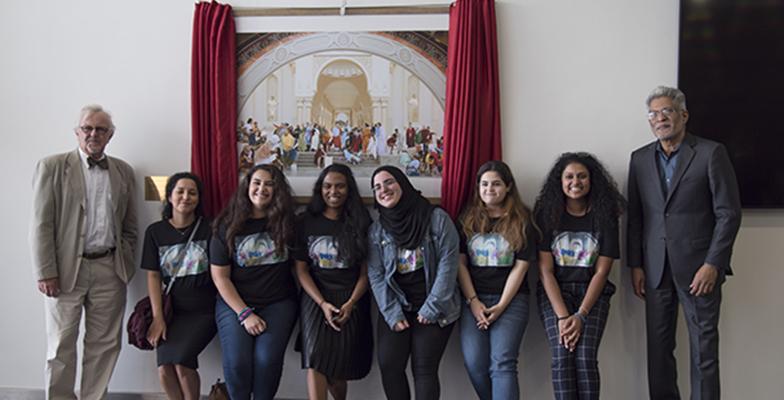 Members of the academic and artistic community gathered at American University of Sharjah (AUS) last week to witness the unveiling of Redressing the Renaissance, an original artwork by a group of architecture graduates from the College of Architecture, Art and Design (CAAD).

Created in honor of Dr. Martin Giesen, Professor of Art and Design, for his many years of service to AUS, the contemporary and highly creative artwork depicts a re-enactment of Raphael’s School of Athens and is a fruitful culmination of several years of planning and conceptualizing.

The artwork was unveiled by Dr. Björn Kjerfve, Chancellor of AUS, along with Dr.  Giesen, and will be part of the college’s permanent collection of artworks on display.

Dr. Varkki Pallathucheril, Dean of the CAAD, said, “Dr. Giesen has worked tirelessly for the benefit of the College of Architecture, Art and Design over the past 20 years. This was a perfect way for our students to express their gratitude for his inspirational and generous support throughout their experience at CAAD.”

“This re-creation of Rafael’s masterpiece is an impressive feat, not only for its scale and careful attention to detail, but also for its ability to stand its ground as an independent work despite being a re-enactment of a Renaissance masterpiece. We are honored to now have this piece on permanent display within the College of Architecture, Art and Design,” said Dr. Pallathucheril.

The ambitious project was taken on by a group of seven architecture graduates from the College of Art, Architecture and Design during their last semesters at AUS. Divya Mahadevan, Farah Monib, Zahra’a Nasralla, Uthra Varghese, Gopika Praveen, Tasnim Tinawi and Nabeela Zeitoun worked together to create their tribute to Dr. Giesen.

The all-female group has received acclaim for their work by regional and international media, and was featured in the June 2018 edition of Harper’s Bazaar Arabia Art.

Flawlessly edited by Tasnim Tinawi, the digital composition features a backdrop that was created to match the regality of Raphael’s original context in his painting, pieced together from images of architecture around the AUS campus.

The well-known scene, this time captured by digital camera instead of an artist’s brush, was skillfully reimagined in a modern setting and takes into consideration the individual characters, their genders and the context.

Faculty from CAAD and students from different years, majors and backgrounds were selected to participate in the reenactment, and all agreed that the entire process was handled in an extremely organized and efficient manner, ultimately resulting in the highly memorable and meaningful artwork.

“This artwork leaves a meaningful legacy, not only for Dr. Giesen but also for the individual creators, the actors and their AUS peers, as it speaks to the unique experience of being part of American University of Sharjah,” said Dr. Pallathucheril.

Redressing the Renaissance can be viewed on campus at AUS at the College of Architecture, Art and Design.