College of Arts and Sciences Department of English

Agasi, Maya. (2016). Arts: Fiction and fiction writers: United States, in the Encyclopedia of women and Islamic cultures, Supplement 14. This entry offers an overview of Arab American women writers and how they configure their transnational and intersectional identities as they are formed on the US landscape. Such identities are inextricable from issues of social justice, religion and race, and are entrenched in cultural practices such as cuisine and storytelling. It includes a discussion of the works of Laila Lalami, Samia Serageldin, Suheir Hammad, Dima Hilal, Nathalie Handal, Mohja Kahf, Diana Abu-Jaber and Susan Abulhawa, to name only a few. 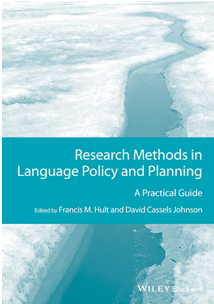 Al-Issa, Ahmad. (In-press) Language and identity construction in a globalized world. Routledge handbook of Arabic and identity. This chapter discusses language and identity through a post-structuralist lens. It focuses on the sometimes tenuous connection between Arabic and an Arab identity in the UAE, where the linguistic landscape and its sociolinguistic multilingual context give Arabic speakers countless ways to construct complex and multifaceted identities.

Al-Jubouri, Firas A. J. (2014). Milestones on the road to dystopia: Interpreting George Orwell’s self-division in an era of ‘force and fraud’. Newcastle: Cambridge Scholars. The monograph presents new insights into Orwell’s literary canon by offering distinct analytical acumens that allow for an updated understanding of his political mind-set and the issue of “self-division”; it demonstrates how this epithet helps in understanding Orwell’s character, works and the nature of totalitarian politics. 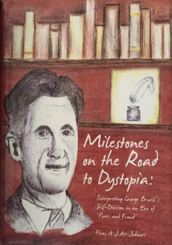 Bae, Sun-Hee. (2012). NP languages do not have N’-ellipsis: Examination of Korean and Japanese. Harvard Studies in Korean Linguistics 14, 273-284. This is a comparative study of Japanese and Korean structures involving the genitive Case markers –no and –ui, respectively. I first show that in no case can Korean be analyzed as having N’-ellipsis (Saito & An, 2009). Based on this analysis, the Japanese ‘N’-ellipsis’ cases can be analyzed exactly like the Korean genitive Case marker –ui followed by the pro-form geos. I will argue that Japanese, in fact, does not have N’-ellipsis of any sort, contra Saito, Lin, and Murasugi’s (2008) claim that Japanese N’-ellipsis (or NP-ellipsis, assuming DP) is licensed by a non-null Spec, DP. I propose that the apparent cases of Japanese N’-ellipsis are haplology of the genitive Case marker –no1 and its homonym –no2 ‘one/thing (pro-form)’. The findings further suggest that typologically, only languages with the genitive in D-head positions, such as English and Chinese, allow N’-ellipsis.

Bahloul, Maher and Carolyn Graham. (2012). Lights camera lights and the brain: The use of film in education. Newcastle: Cambridge Scholars. This book is about an innovative pedagogy whereby performing arts and digital production play a key role in teaching and learning. The book combines theory and practice; as such, it lays solid neurological foundations for film and media literacy, and provides several relevant practical applications from worldwide scholars. The book contains thirteen chapters—three of which address a number of theoretical issues related to the camera and the brain while the remaining ten are practical illustrations of the extent to which film and video are used as pedagogical tools.

Benati, Alessandro and Paul A. Malovrh. (2018). The handbook of advanced proficiency in second language acquisition. Hoboken, New Jersey: Wiley. This book offers an overview of the most recent and scientific-based research concerning higher proficiency in second language acquisition. With contributions from an international team of experts in the field, the Handbook presents several theoretical approaches to SLA and offers an examination of advanced proficiency from the viewpoint of various contexts and dimensions of second language performance.

El-Sakran, Tharwat M. (2018). Understanding our audience: The writing of email messages from concept to completion. The Journal of Languages for Specific Purposes, 5, 19–30. This article presents a pragmatic approach for teaching the how of writing appropriate and effective professional messages. It offers practical guidance on how contexts condition the writing process.

Golley, Nawar Al-Hassan. (2003). Reading Arab women’s autobiographies. Austin, Texas: University of Texas Press. Employing a variety of western critical theories to the autobiographies of Arab women, Nawar Al-Hassan Golley demonstrates what these critical methodologies can reveal about Arab women's writing. At the same time, she also interrogates these theories against the chosen texts to see how adequate or appropriate these models are for analyzing texts from other cultures. This two-fold investigation sheds important new light on how the writers or editors of Arab women's autobiographies have written, documented, presented and organized their texts. 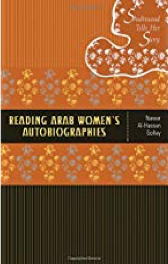 Gregersen, Tammy and Peter D. MacIntyre (2016). Optimizing language learners’ nonverbal behavior. Bristol: Multilingual Matters. The book highlights the pivotal role that nonverbal behavior plays in target language communication, affect and cognition. It integrates research tenets and video demonstrations of nonverbal behavior with structured activities that will guide teachers and learners of any language to capitalize on the nonverbal means at their disposal.

Highland, Kristen Doyle. (2016). Locating the bookstore: Geographies of book culture in antebellum New York City, Book History, 19. This study explores the landscape of retail bookstores in New York City between 1820 and 1860, tracking patterns of growth and trade through original maps and examining the material and symbolic significance of the built environment of bookstores. By layering scales—physical and social geography, the city and store, the map and narrative—this article demonstrates the significance of local literary spaces to broader conceptions of book culture.

Kassam, Hamada. (2016). Tom Sawyer said he was “a stranger from Hicksville, Ohio, and his name was William Thompson.” The Mark Twain Annual, 14(1), 127–137. This peer-reviewed journal article highlights the impact that frontier humorist William Thompson had on Mark Twain’s composition of his masterpiece, Adventures of Huckleberry Finn (1884), and his 1894 book, Tom Sawyer Abroad.

Keegan, Daniel. (January 2018). Indigested in the scenes: Hamlet's dramatic theory and ours PMLA, 133(1), 71–87. This article examines the relationship between writing and performance imagined in Shakespeare's Hamlet. Theorists have tended to imagine either that writing dominates performance or performance writing: I argue that Hamlet, through the figure of digestion, models a more fraught, uncertain relationship. The play's “indigestive dramaturgy” provides a more democratic account of dramatic performance.

McAllister, Brian J. (May 2014). Narrative 22.2 guest editor of special issue on poetry and narrative. The essays in this special issue sample a growing field of study within narrative theory: narrative in poetic form.

McCarthy, Philip M. and Chutima Boonthum-Denecke (Eds). (2011). Applied natural language processing: Identification, investigation, and resolution. Hershey, Pennsylvania: Information Science Reference. This book is one of two volumes forging the new and rapidly developing field of Applied Natural Language Processing (ALNP). The book begins by introducing and explaining the broader field. The body of the book features three parts, providing (1) an introduction to the various subfields that comprise ANLP, (2) an overview of some of the most cutting-edge technology that has helped to ground the field and (3) a series of state-of-the-art research projects that are moving the field forward. The book features sections written by some of the foremost names in the field, including Dr. Art Graesser, Dr. Danielle McNamara, Dr. Scott Jarvis and Dr. Walter Kintsch 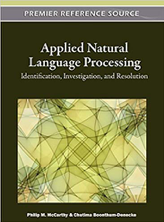 Parra-Guinaldo, Víctor and John M. Ryan (2016). Classification and history of relexified diminutives in Modern Spanish: A lexicographic approach. In Ma Victoria Domínguez-Rodríguez et al. (Eds.). Words across history: Advances in historical lexicography and lexicology. Las Palmas de Gran Canaria: Universidad de Las Palmas de Gran Canaria. This study provides a quantitative analysis of the entirety of diminutives, relexified in the history of Spanish, by utilizing three separate dictionaries. This study has resulted in the first complete, quantitative and diachronic classification of relexified diminutives in modern Spanish, which uses several dictionaries to provide a more comprehensive description of a given lexical phenomenon. 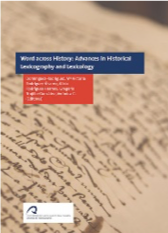