Jayant Menon Manavazhi, Supply Chain Director at American University of Sharjah has once again reached new heights—this time at the base camp of the highest peak in the world, Mount Everest, in Nepal. Standing at an altitude of 5,365m, the Southern Face Base Camp offers some of the most spectacular mountain scenery in the world.

“I left the UAE on Saturday, September 2 and travelled to Kathmandu and then on to Lukla, where the climb started. The initial plan was to fly to Lukla immediately after arriving in Kathmandu, but due to bad weather at the Lukla Airport, we could not travel the first and the second day after arriving in Kathmandu. So, the team decided to hire a helicopter on the second day to start the trek from a point 300 meters below Lukla and we started from there.”

According to Jay, as he is well known to his colleagues at American University of Sharjah, the trip was organized by the company Himalayan Wonders and there were 14 people in his group from eight different countries.

Jay, who climbed Mt. Kilimanjaro in Tanzania last summer, said the trek was longer and more difficult than the Kilimanjaro hike. “It took us nine days to reach base camp and three days to reach back to Lukla. We walked on average about 20kms per day, which included vertical and steep descent, and we stayed in so-called tea houses/lodges, where you have basic amenities in tin-roofed and wooden structures. The scenery starts with forests, and as you go up it becomes bushes—that’s when the wind hits you—and finishes off with rock boulders on glacier. It is just spectacular scenery.”

“We were allowed to carry a maximum of 30kgs each, of which 20kgs were carried by porters and 10 in our backpacks. Food was provided by the tea houses, so we only carried warm clothing, water and snacks in our day pack. Warm clothing was important as the weather was very unpredictable. It started out at 5°Celcius at Lukla and it got down to between -15°C to -20°C at basecamp. By the time we reached basecamp we all had at least five to six layers of clothing on us.” 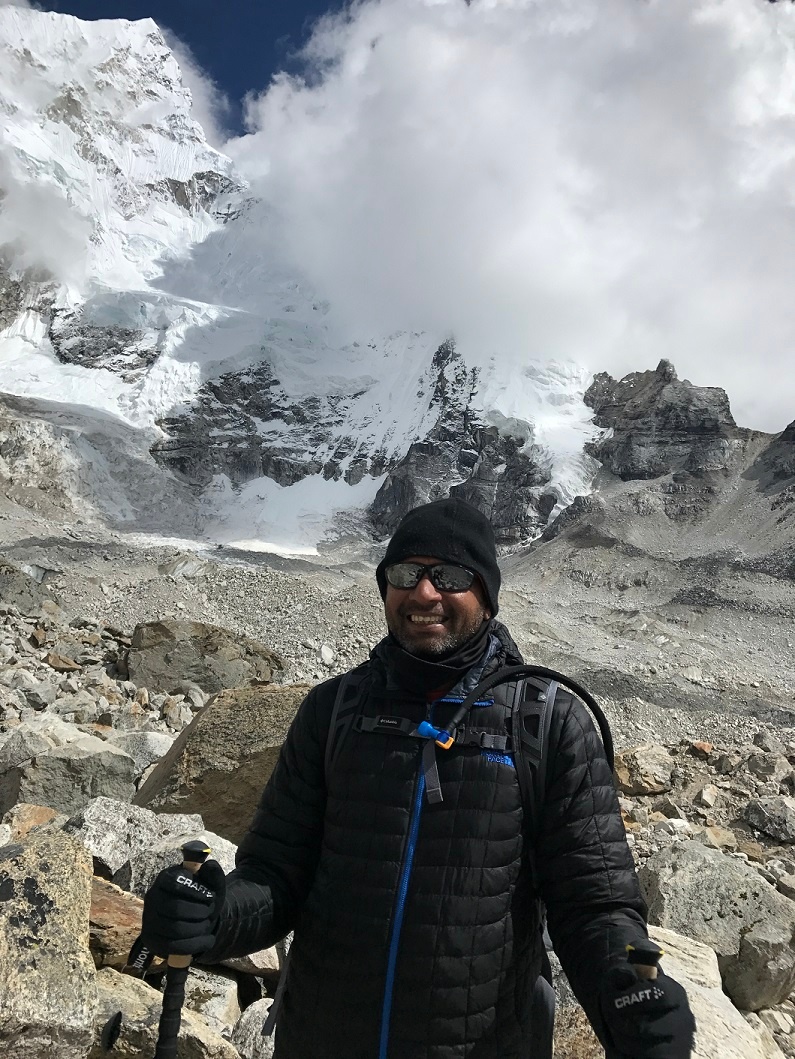 According to Wikipedia, about 40,000 people trek the South Base Camp in Nepal each year.

“Several people asked me why I did this. And my answer to them is this is one way that I have found to keep myself motivated, to stay fit and work towards higher sustainable personal goals; to think beyond malls, restaurants and grocery shopping,” said Jay. “This was indeed an experience of a lifetime and I would urge everyone to visit the Himalayas. The memories of this mountain will remain with you forever.”

When asked what was the biggest take away from the trip, Jay said, “Fourteen of us—from eight different nationalities, from different religions, cultures and backgrounds—met as strangers and worked together towards a common goal, caring for each other, helping each other till the last day, despite of harsh weather conditions. At the end of the trip, it was difficult for us to leave the group, as the friendship and teamwork that developed during the trip was priceless.”

Regarding future plans for more adventure, Jay said, “If God, time and health permits, I would like to summit Andes Ranges in Chile or Mount Vinson in Antarctica, next year.”

Gureni Lukwaro is a Social Media Specialist at the American University of Sharjah.