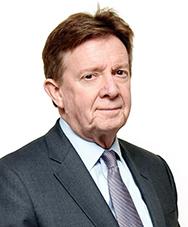 Dr. Cornelius M. Kerwin became American University’s 14th president in September 2007. He led an institution of about 13,000 students from 144 countries, 1,500 teaching and administrative faculty, and 1,800 staff in the nation’s capital; oversaw a $700 million operating budget and $600 million endowment.

Dr. Kerwin joined AU in 1975 and holds a faculty appointment in the School of Public Affairs, Department of Public Administration. He was Dean of the School of Public Affairs from 1988 to 1997; Provost from 1997 to 2005; and acting—then interim—President of American University from 2005 to 2017.  Dr. Kerwin stepped down as President of American University on May 31, 2017 and returned to the faculty.

A nationally recognized specialist in public policy and the regulatory process, Dr. Kerwin is actively engaged in research and periodically teaches courses in administrative process, policy implementation and American government. He founded AU’s Center for the Study of Rulemaking and is the author of Rulemaking: How Government Agencies Write Law and Make Policy. The fifth edition of Rulemaking is currently under revision. He is also the author of numerous scholarly articles and professional publications.

Dr. Kerwin served as a member of the board of directors of the American Council on Education (ACE) (2012-15) and on the board of the National Association of Independent Colleges and Universities (NAICU) from February 2012 to February 2014. He is a member of the Executive Committee of the Greater Washington Board of Trade, the DC Chamber of Commerce, and the DC Government’s Economic Strategy Advisory Committee. Dr. Kerwin chaired the Consortium of Universities of the Washington Metropolitan Area Board of Trustees (2013-15) and the Patriot League Council of Presidents (academic years 2013-14 and 2014-15).  He is currently a Senior Fellow with the Institutional Resources Program of the Association of Governing Boards.