AUS College of Architecture to design shades for security guards

As part of the fifth year design-build project, 16 Architecture students from the College of Architecture, Art and Design (CAAD) at American University of Sharjah (AUS) are working on a project that is designed to provide suitable shading for security guards on campus. Supervised by William Sarnecky, Associate Professor of Architecture, the students have designed and are currently constructing a booth outside the CAAD building that will provide shade for security guards stationed at the University Health Center and CAAD building gate.

Sarnecky, who earned his master’s degree in architecture at the University of New Mexico in the United States, said that the function of the booth would extend beyond its simple job of providing shade for security guards.

“The booth will be two-sided, on one side will be the security guard booth which will be air-conditioned and will have a chair, a desk, some storage facility and a refrigerator. It will also have a sort of a front porch where the guards can be outside and still have a shade,” said Sarnecky. 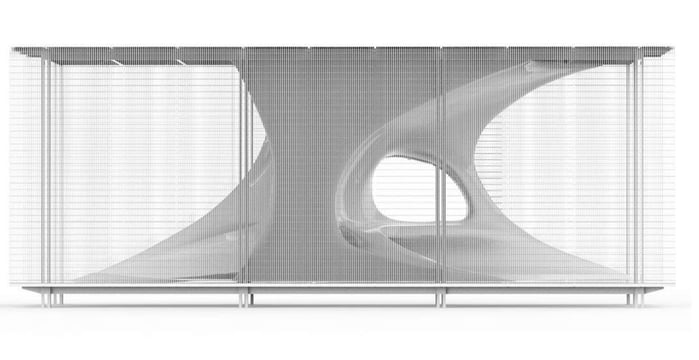 “The other side will have a communal garden component that will include a flower garden and a drinking fountain for the landscape workers and underserved populations on campus–people who don’t seem to get a lot of attention paid to them but work hard to make the campus function,” Sarnecky continued.

The design will be covered by a bar grate cage, featuring top and side shading to protect security guards from the summer heat.

“The watchmen are on 12-hour shifts and they are required to be outside of the booth 70-80 percent of the time. It’s the least we could do for them,” he added.

According to Sarnecky, the roof will consist of solar panels that will provide energy for air conditioning during the day. He said that if the project receives the necessary funding for batteries, the panels would also provide electricity throughout the night.

Sarnecky added that he faced a few obstacles initiating the project.

“By developing the program as architecture students and professors tend to do, we’ve expanded the scope of our budget,” he said.

He noted that the design is site specific and not intended to be randomly placed.

Sarnecky stated that CAAD will monitor the booth’s energy consumption in order to report back to the university about any differences observed.

Aya Sadek is a student at American University of Sharjah.