CAAD walks: Observing with all the senses 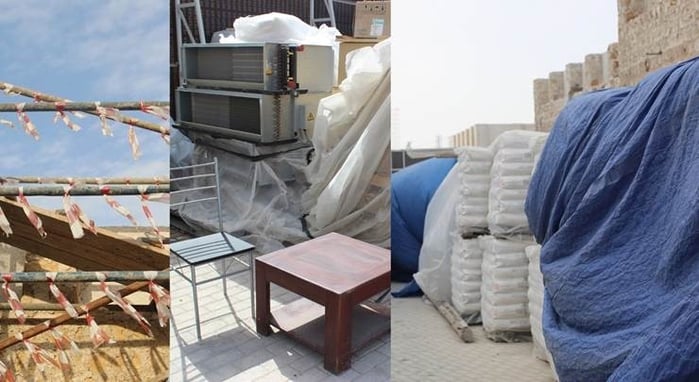 Opportunities to grow and enhance your talents and skills at American University of Sharjah (AUS) are plenty. Here, you are encouraged to learn and explore beyond what you learn inside the walls of a classroom. The workshop Walking as Learning to See, which was offered by the College of Architecture and Design (CAAD) for its students enrolled in the CAAD Foundations Program, was one such opportunity for students to work on a project that encouraged them to think innovatively and creatively.

Professor Roberley Bell, an American artist with experience in interdisciplinary arts at a foundational level, led the workshop that 110 freshman students were a part of. Professor Bell teaches in the College of Imaging Arts and Sciences at Rochester Institute of Technology in New York and this was the second time she has offered this workshop at AUS.

“When I came to AUS last time, I had been to Sharjah before but I hadn’t done this workshop,” said Professor Bell. “I really learned a lot from the students about things that were happening, such as the cultural things, and I also learned about the little corners of the city. So this time, as soon as the students started to talk about something, I was more informed, which changes the experience.”

Since Professor Bell was at AUS for a longer period this time, students could gather a lot more information to work with and had more time to think about the possibilities regarding their project. The students, who were grouped into teams of three, had to work on an observation journal as an expressive extension of learning to see time and space. For the two weeks of the workshop, which began on March 7, the students worked on the observational journal, and on March 20 they displayed their artwork based on that journal, such as maps and visual reference collages, in an exhibition at the college.

The aim of the workshop was to teach the students, as creative practitioners and designers, to see the world with all of their senses and not just rely on their eyesight to observe their surroundings. The idea was to consider walking as a means to see with their senses. We live a hectic and fast-paced lifestyle, which means that we often don’t take the time to observe and appreciate the things around us. However, according to Professor Bell, walking heightens all of our senses because when we are in a particular place, and not just going past it, we smell the air, we feel the ground underneath our feet and we hear the noises that fill the surroundings. Walking also slows us down, so the pace of our sensory observation also slows, which means that we really are able to take in more information. It’s really important for us to go beyond what something really looks like in order to understand space, said Professor Bell. Moreover, as we walk undirected, the unknown unfolds because we let our senses lead us to the things that interest us as we drift from one place to another. So the students, as they walked, tried to use all of their senses to understand the space of the city through the user.

The project got them out of the traditional classroom, and the city became their laboratory, their class, their site of learning. The students were given the freedom of choosing the sites they wanted to observe in the city. According to Professor Bell, projects such as this can benefit students in several ways, some of which they might not even realize. Such projects help them acknowledge that there is no shortcut to solving a problem, and that one needs to do the research and hard work in order to succeed. The students also learn to trust their instincts, and learn to believe in a design project that is created through a laborious process. Another valuable aspect of such a workshop is that it helps to instill confidence in the students, and makes them realize that to be a good designer one has to invest the time and energy, and has to passionately want to do such type of research to understand something. Workshops such as these also provide opportunities for a diverse student body to work together in a collaborative setting.

As part of this workshop, students also had some challenges that they needed to overcome. The biggest challenge for the students was to come up with their own sets of criteria to work with all the information they archived through their field research. They also had to seek the problem, which was much harder than them getting a problem to solve. This meant that instead of them getting a location to design something for, the students had to find their own site in the heart of Sharjah and then decide what would be best on that site. They had to consider what they could design to make the site active for the user.

According to Professor Eirik Heintz, Director of Foundations at the College of Architecture and Design, “Professors at CAAD understand and acknowledge that curricula are evolving worldwide to address the global, economic, social and cultural shifts that will play a role in students’ future. They believe that it is essential to include integrated learning and learning through collaborative practices in these changes. This is why it is the desire of the foundations professors at AUS that this type of workshop and project will become part of the on-going curriculum in the years to come.”