It was so good, I mean very good. You want to know how good? I will tell you this, even the Chancellor Dr. Björn Kjerfve couldn’t remain seated, he got up and participated. That is how good this got when American University of Sharjah hosted fusion band Red Baraat on Monday, February 20.

Hailing from Brooklyn, New York, the eight-member band combined North Indian bhangra music with influences from funk, go-go and jazz. The audience enjoyed the band’s covers of Bollywood songs and their upbeat versions of sufi music. Students, faculty members and staff present cheered on the band and danced along throughout the performance.

“This is very nice as students gets to take a little break from studying hard,” said Dr. Kjerfve.

The academics at AUS are not necessarily easy and require effort, said Chancellor Kjerfve, adding that the AUS curriculum introduces students to all kinds of fields. Aside from major-related courses, the university requires its students to earn credit hours in the liberal arts subjects to help AUS students become well-rounded individuals.

“This past week was so stressful. I’m glad AUS hosts events like this all the time to break the tension of schoolwork,” said Amna AbuDyak, a sophomore in international studies.

“It is very healthy for students to be not just good in their own field but also to take advantage of other opportunities including cultural and entertainment opportunities like this,” Chancellor Kjerfve said.

The event was a collaboration between the AUS Cultural Events Committee, the American Cultural Club, the Indian Cultural Club and the US Consulate General Dubai.

The show had a short intermission in which students had a chance to directly interact with the band’s founder and drummer Sunny Jain. One student asked him about the origin of the group’s name and Jain said that his inspiration came from brass bands that play at typical Indian weddings. He added that the word baraat means “wedding reception” in Hindi and the color red is usually associated with Indian ceremonies. 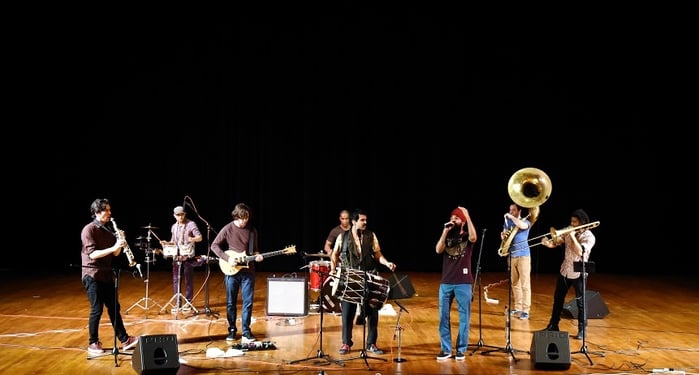 “Composing was a way of reconciling these Eastern traditions I grew up with and the Western tradition along with my strong Indian and Punjabi background,” he said, when asked about his liking for fusion music.

He added that “the wide variety of different backgrounds” each band member comes from helps them create such tunes.

Bello said that the band reflects the diversity of the American population as well as of the AUS community.

“We brought Red Baraat because they are a very talented [and] diverse group, coming from a very diverse city and it’s a perfect fit for a very diverse country like the UAE and a diverse student body like AUS,” Bello said.

Board members of the Indian Cultural Club served as hosts for the event, and entertained and engaged the audience between songs.

More cultural events are planned for the semester, along with sports activities, lectures, conferences and workshops. See www.aus.edu/events for more information. The next performance will be the String-Wind Ensemble from the Samara State Philharmonic Hall and Samara Academic Opera and Ballet Theatre in Russia tomorrow, March 15 at 7:00 p.m. Tickets are available at the Cashier’s Office.

Falah Gulzar is a student at American University of Sharjah.