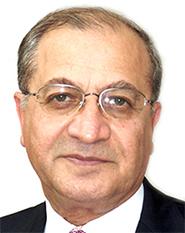 Dr. Hani Findakly, an investment banker, is Vice Chairman of the Clinton Group Inc. in New York. He has held senior financial positions, including, inter alia, Group Head of International Capital Markets, Drexel Burnham Lambert; Managing Director, Global Risk Management, PaineWeber Inc.; CEO, Potomac Babson Inc.; and, Chairman, Dillon Read Capital Management. Prior to Wall Street, Mr. Findakly was the Director of Investments and Chief Investment Officer of the World Bank Group. His early career was in academia as a member of the faculty at MIT, and as Organization of American States Visiting Professor at the Catholic University in Rio de Janeiro, Brazil.

Dr. Findakly has written and lectured on global capital markets, risk management and corporate governance. A lifetime member of the Council on Foreign Relations, he is listed in Who's Who in America. He is a recipient of the Goulbenkian Foundation award; Sigma Xi (research excellence); Chi Epsilon (engineering excellence); and the 2009 Ellis Island Medal of Honor.