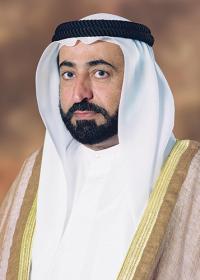 Chairman of the Board and President of AUS

His Highness Sheikh Dr. Sultan bin Muhammad Al Qasimi is a member of the Supreme Council of the United Arab Emirates, the Ruler of Sharjah, and President of American University of Sharjah.

His Highness became the Ruler of Sharjah and its dependencies and a member of the Supreme Council in 1972. He is the 15th Ruler of the Emirate of Sharjah in a chain of Al Qasimi rulers since the year 1630. He served as the UAE Minister of Education from 1971-72. As the Ruler of Sharjah, His Highness has led the social, economic and cultural development of the emirate. In addition, His Highness has devoted considerable effort and resources to promote intercultural interactions and dialogues among the peoples of the world. He is known throughout the region as a firm believer in the significance of the role arts and culture play in bridging the minds and souls of the people of the world. Toward this aim, he initiated the touring Sharjah Cultural Festivals, which bring aspects of Arab and Islamic arts and culture to the cities around the world.

His Highness has placed great emphasis on nurturing civic awareness, participation and social responsibilities and has encouraged the establishment of many non-governmental organizations to promote social interactions between the communities and the government. He established the Sharjah Consultative Council to involve the people of Sharjah in the development and review of projects at all levels within the Emirate of Sharjah. He also established municipal councils in the cities and towns of the Emirate of Sharjah to decentralize the consultations between the communities and the different levels of government. He has actively promoted the establishment and development of numerous organizations, museums, institutes and associations fostering culture, the arts and science, academia, cultural and national heritage conservation, commerce, industry and agriculture.

He has served as Honorary President of various organizations and associations including the Union of Arab  Universities; the Arab Theater Institute; the Society of Arab Astronomy and Space Sciences; the Islamic International Organization for the History of Sciences; the Egyptian Association for the Study of History; the Council of World University Service (WUS); the Sharjah City for Humanitarian Services; as well as Honorary Member of the Centre of Middle East and Islamic Studies at the University of Durham, and the Union of Writers of Egypt.

His Highness is the recipient of numerous awards and medals including The Sheikh Zayed Book Award's Cultural Personality of the Year 2010; the Gold Medal from the Union of Arab Universities; Jordan; the Gold Medal from Yerevan University, Armenia; the Human Rights Medal and the Avicenna Gold Medal from UNESCO; the Gold Medal from the Arab League Education Science and Culture Organization (ALESCO), Tunis; the Gold Medal from the Islamic Educational Scientific and  Cultural Organization (ISESCO), Morocco; the Gold Medal from the Research Centre for Islamic History Art and Culture, Institute of Research in Islamic History, Arts and Culture, Turkey; Distinguished Personality of the Year Award by the Sheikh Hamdan bin Rashid Award for 2008; the Princess Fatima Ismail Distinguished Award from Cairo University; the Distinction Trophy from the International Arab Theatre Organization; Founding Member of the University of Exeter's College of Benefactors from Exeter University, UK; Member of the Companion of the Guild of Cambridge Benefactors from Cambridge University; Order of Merit from the Republic of Senegal; Distinguished Personality of the Year from Al Qareen 10th Cultural Festival, Kuwait; Honorary Member of the National Geographic Society, USA; Republic Order in Arts of the class of a Knight, Republic of France; the Distinction Award from the King Faisal International Islamic Award, Saudi Arabia; Honorary Fellowship from the Centre for Middle Eastern and Islamic Studies, University of Durham, UK; and the Academic Excellence Award from the Sheikh Rashid Al-Maktoum Award, UAE; among others.

His Highness has authored a number of important scholarly texts as well as plays, which have been translated in English, German, French, Spanish, Russian, Urdu, Persian among other languages. Some of these include Muscat and other Forts on the Shoreline of the Gulf of Oman; Sharjah Air Station between the East and West; The Genesis of the Scout Movement in Sharjah; Deep-Seated Malice; A Memorandum for Historians on the innocence of Ibn Majid; Power Struggles and Trade in the Gulf (1620-1820); The Gulf in Historic Maps (1478- 1861); The Rebel Prince; The Gulf in Historic Maps (1493-1931); The White Sheikh; The Journals of David Seton in the Gulf, 1800-1809; John Malcolm and the British Commercial Base in the Gulf 1800; British Occupation of Aden; Division of the Omani Empire (1856-1862); The Myth of Arab Piracy in the Gulf; Samson; Nimrod; Alexander the Great; The Reality, Identical Copy of the Original; The Case; and The Return of Holako; among many others.