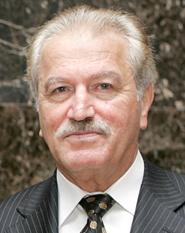 Mr. Riad Tawfik Al Sadek is a distinguished name in the Middle Eastern construction industry. A graduate of the American University of Beirut, Mr. Sadek, together with Mr. Khalaf Habtoor, founded Al Habtoor Engineering Enterprises in 1970.

From a workforce of less than 100 and two projects worth AED 120,000, the company has grown to become one of the leading construction companies in the MENA region with a workforce in excess of 25,000 and work in hand worth over AED 18 billion.

The youngest son in a family of four brothers and three sisters, Mr. Sadek is widely traveled. Born in Palestine, his initial years were spent in Lebanon. After graduating, he trained in the United Kingdom and then spent three years working, the last year of which he was Head of Engineering for the Eastern Region of Saudi Arabia.

In 1967, he moved to Dubai as the UAE became a key market in the Middle East. Mr. Sadek is well known for his philanthropic activities, and he holds a wider interest in humanities. He is an avid reader of contemporary literature and an associate of several literary associations and community service organizations.