“I’m so proud to have been part of it” 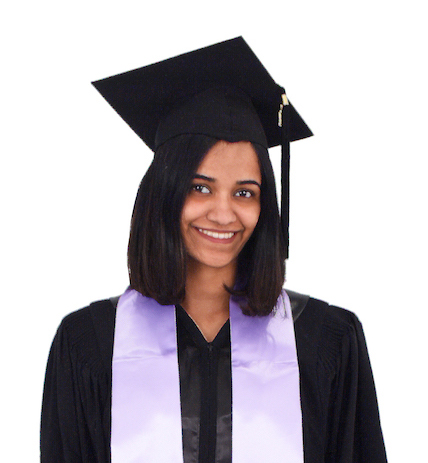 College of Architecture, Art and Design
Bachelor of Science in Design Management

Daniella has been an avid supporter of AUS first-year students, serving as a First-Year Experience (FYE) Ambassador since 2019.

“It was such a wonderful experience where I got to meet so many first-year students and assist them with their transition into AUS, while also developing my interpersonal skills in the process. The FYE program has grown immensely over the past two years, and I'm so proud to have been a part of it and work with the lovely FYE staff members,” she said.

“This was a role I loved because I was able to share my experiences with the new students and guide them on the right path so they could make the most of their time at AUS,” Daniella said.

Passionate about design management, Daniella also used her time at AUS to be President of the Design Management Association (DMA). Working with faculty and staff from the College of Architecture, Art and Design (CAAD), Daniella and her team from the association worked hard to hold several successful virtual events, such as workshops, panel discussions, creative competitions, and collaborations with professors, alumni and other student organizations. They also created several insightful social media posts—all with the intention of increasing awareness about the design management program at AUS.

“As DMA President, I also worked with the CAAD faculty and staff to improve current and incoming student experiences within CAAD,” she said.

Other achievements Daniella can claim through her time at AUS include working as a Teaching Assistant for a faculty member of the School of Business Administration; being Deputy Director of Logistics for the AUS Model United Nations in her senior year; being a selected member of the AUS American Sign Language Initiative under AUS Community Service and Outreach; and being part of the AUS Women's Choir for two years.

Daniella said of the latter: “It was such a fun experience to perform for the end-of-term concerts every semester. That's something I will really miss being part of!”

Reflecting on her greatest achievement at AUS, Daniella said, “I think one of my most successful project was one that I worked on with a team back in my third year. We wanted to deal with the problem of waste from the clothing and textile industry due to fast fashion and wasteful consumerism, and through an intensive four-month period, we worked to create a potential solution to the problem in a very user-centric way. Our project was selected to be exhibited in the MENA Grad Show at the Dubai Design District last year, and it was showcased on a local TV channel.”

Looking ahead, Daniella plans to gain some real-world experience in her field before moving on to pursue a master's degree abroad.