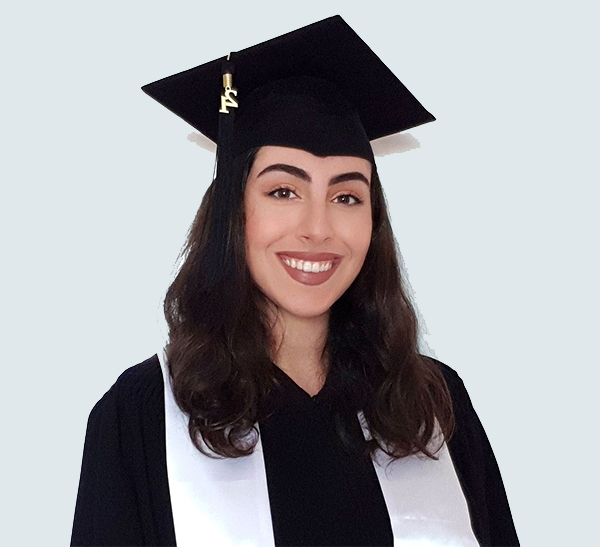 College of Arts and Sciences
Bachelor of Arts in International Studies

“I might be biased, but we have the best department on campus!” said international studies major and Sheikh Khalifa Scholarship winner Katia Kanakri about the Department of International Studies (INS).

As a student enrolled in the international studies program who had never taken any history or political science class in school, Kanakri said the program helped her understand and appreciate complex global issues that she was interested in, and credits her professors for her high achievements.

“Because of my teachers and the opportunities I had, I went from being an intimidated, first-year student enrolled in the wrong major to a confident, achieving and driven member of the CAS and AUS communities!” she explained.

For the young high achiever from Syria, Kanakri’s four years at AUS played an incredible role in helping her grow and achieve her true potential.

“My time at AUS has shown me just how much I am capable of. I discovered a great deal about myself, my interests, and my abilities. AUS completely exceeded my expectations, and I am so appreciative of it all,” she said.

As an active AUSer, she held a number of positions in student jobs and student organizations, including being the CAS Peer Advisor at the Academic Support Center, the president of the CAS Student Team, the treasurer of the International Studies Students' Association, the student editor of the INSpire Journal, and the Career Services and Outreach Officer at the CAS Career Services Office.

“I've grown exponentially from all these opportunities I was fortunate enough to have. I also discovered my passion for music during university and became active in the AUS choir, Arabic Music Ensemble, voice lessons, and the Performing Arts Program in general, and it completely transformed my AUS experience!” she noted.

One of the highlights of her university journey was being declared the winner of the prestigious Sheikh Khalifa Scholarship. Representing CAS and being one of only four students chosen for the award from the entire university, she said could not believe that she had been selected for the award and burst into tears of joy upon being informed of the news.

“I had a slight inkling that I might have a chance at winning the scholarship as I was a good student who did well in her courses and was involved in extra-curricular activities, but I also knew so many CAS peers who inspired me with their intellect, passion, and hard work and were equally worthy of the award if not more, in my eyes. So, when I got the news that I had won, it was hard to believe that I, too, belonged to that special category of students who were my inspiration. It's gratifying and reassuring to have your efforts recognized by such a prestigious award, and I am incredibly humbled, fortunate, and grateful for it,” she said.

“AUS has taught me a lot and helped me grow in ways I had never imagined. I am very proud of how much I've pushed myself out of my comfort zone and challenged myself to learn and grow – whether it’s the topics I've chosen for my academic research or performing in public or assuming leadership positions in jobs and campus clubs,” she said.

“And now, after graduation, I plan to work for at least a year to gain experience in a job that provides me with an opportunity to help people and communities as well as helping me obtain a more concrete understanding of which field I would like to pursue. I've learned to trust my vision and abilities and find power in my flexibility. I believe that remaining flexible in my plans for now will allow me to take advantage of the opportunities that I will come across, especially during a transitional phase such as post-graduation.”