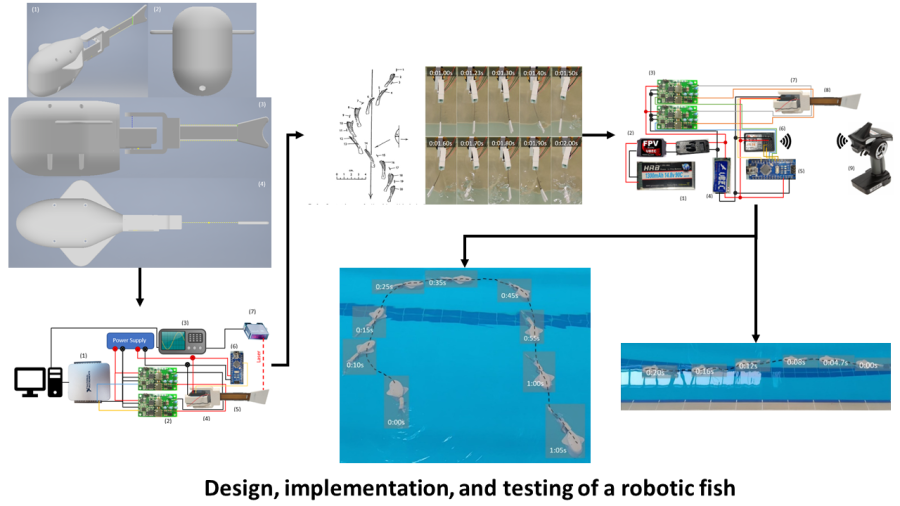 Aquaculture production contributes significantly to the total world production of aquatic animals. Numerous environmental pollutants may reach coastal waters where marine aquacultures are established via several sources such as coal-burning electric utilities, manufacturing plants, and batteries wastages. Mercury is one of the most hazardous environmental pollutants due to its health implications on humans. As such, there is a need to assess the contamination of sea water to ensure the safety of seafood and effectively prevent health deterioration due to mercury absorption through seafood consumption. Our current project is concerned with the development and evaluation of a chemical sensor comprising of electrically-actuated microbeams coated with Metal Organic Frameworks (MOF)-based composite to selectively sorb mercury. The developed MOFs showed great capability to adsorb and detect mercury in aqueous media solutions with wide response interval (20-1000 μM), low detection limit (10 μM) and fast response time (immediate).

Modeling and design of MEMS

There is an emerging use of MEMS devices deploying electrically-actuated vibrating beams for several applications including inertial/bio-mass/gas sensors, microswitches and RF filters. Progress in micromachining technology has boosted the development of these miniaturized devices at reduced manufacturing cost and time with improved performance, possible integration with electronic circuits, and low power consumption. The performance and sensitivity of MEMS devices can be significantly improved through understanding their governing dynamics and exploiting specific physical phenomena. The objective of our research is to develop decent numerical models of electrically-actuated microbeams operating in different media by integrating continuum mechanics theories with robust discretization schemes. We carefully verify their capability to properly capture the associated nonlinear dynamics and use them to (1) investigate the possible use of novel operating principles for sensing and switching applications by exploiting some nonlinear aspects such as pull-in instability (2) assess the robustness of the microstructure to withstand mechanical shock and (3) come up with recommendations for design enhancement.

The performance of aerodynamic systems such as air vehicles, suspension structures, and wind turbines, could be assessed at the earliest stages of design through the deployment of computational tools. Recent advances in computer hardware and software have overcome the computational burden associated with the numerical integration of the equations governing the aerodynamic performance of the aforementioned systems. We developed and implemented a fast and efficient numerical implementation of a potential flow solver based on the unsteady vortex lattice method (UVLM). This computational tool has the capability to simulate the unsteady aerodynamic behavior of a wide range of moving and deforming bodies. It has several features including the simulation of enclosure effects, multi-body interactions, and B-spline representation of body shapes. This computational tool has been successfully combined with optimization algorithms to identify the optimal wing shape and kinematics that maximize the performance of flapping wings. It has been also coupled to structural models to analyze the nonlinear behavior of aeroelastic systems. We are currently expanding the use of the computational tool for other engineering applications.

The need to deliver the power required for charging remote sensing systems and wireless electronic devices has boosted the development of several energy-harvesting technologies. One attractive alternative for generating electrical energy is to use miniature wind turbines in the presence of windy environments even at low wind speeds. The small-scale wind turbine systems can serve for various applications, such as powering portable electronics (e.g., cellular phone, pocket radio, GPS…) in isolated or abandoned areas, wireless sensing systems placed in confined and inaccessible spaces (e.g., sensors for the structural health monitoring of bridges) in which wiring and replacing batteries need hard and expensive maintenance. The range of applications can be further extended to include powering home security systems (e.g., outside camera, alarm…). Our ongoing research effort deals with the design, experimental verification, and performance analysis of portable horizontal axis wind turbines targeting low-power applications. Our objective is to develop miniature wind turbines that satisfy some performance requirements such as portability, good modularity, small scale (rotor diameter less than 100 cm), and capability to operate at low wind speeds and generate efficiently electrical power in the order of few Watts.

Bird flights constitute a great source of inspiration for the development of small powered air vehicles that may operate in urban environments and confined spaces (e.g., inside buildings, caves, tunnels). Our ongoing research includes the design and implementation of bio-inspired air vehicles that are equipped with tiny sensors to be deployed for the inspection of harsh environments inaccessible to other types of vehicles, detection, and tracking of small and hidden mobile objects. The design goal is to satisfy performance requirements, such as agile maneuverability at low flight speeds, hovering capabilities, high lift to hold its own weight, and robustness to withstand potential shocks with obstacles. We are also looking at expanding their use for other applications and needs relevant to UAE.

Much of our research has focused on model reduction for fast simulation of large dynamical/energy systems. We have worked on different fluid and aeroelastic systems and developed reduced-order models to speed up the simulation of their behavior. For instance, using perturbation techniques, we were successful to develop methodologies that enable a low-dimensional representation of aeroelastic systems which are originally governed by a set of highly-nonlinear partial differential equations. We showed the usefulness and effectiveness of these methodologies for the in-depth study of the physics underlying the system, the implementation of control strategies, and the identification of high-impact system's parameters.

In a research project related to model reduction, we combined concepts of the generalized multiscale finite element method and mode decomposition approaches to construct a robust local-global approach with the capability to speed up the simulation of single and multiphase flows in highly heterogeneous porous media. The resulting reduced-order approach has enabled a significant reduction in the flow problem size while accurately capturing the behavior of the fully resolved solutions. The proposed approach can provide a reliable forecasting tool of reservoir simulation in real time and then can be efficiently used to perform uncertainty quantification or optimization studies and history matching. We have demonstrated the potential use of several model reduction techniques for fast simulations of complex physical problems covering a wide range of engineering applications.