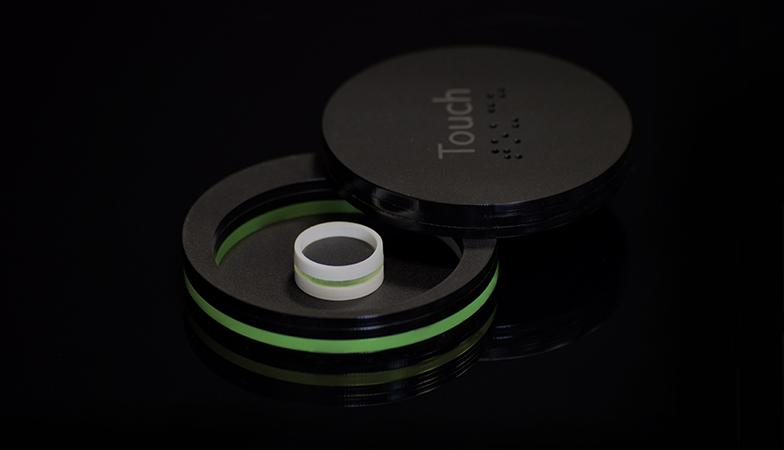 American University of Sharjah (AUS) alumni have been named UAE national winners and runner-up of the prestigious James Dyson Award for their innovative concepts that aim to use interactive design technology to improve the lives of users. The three multimedia design graduates of AUS’s College of Architecture, Art and Design (CAAD) received their awards at a private awards ceremony on Monday, September 21 in Dubai, attended virtually by CAAD Dean Dr. Varkki Pallathucheril.

The winning entry, Touch, enables visually impaired individuals to experience color through a discreet smart ring worn on the finger. By passing the ring over different objects, the accessory detects color, which is communicated to the wearer audibly, and through colored lights for those who can see degrees of light and shade. The final concept design includes the smart accessory and a portable charging pod that lights up and reads out the charge.

Nada Aldash and Maryam Moustafa first developed the concept in their senior year of the multimedia design program at the AUS College of Architecture, Art and Design, under the guidance of Assistant Professor Frederic Gmeiner. The idea originally came to them after watching a YouTube video by a person who was born blind explaining that although he had never seen color, he still had his own conceptual understanding of it.

The two designers were intrigued and connected with the Emirates Association of the Visually Impaired (EAVI), where they met with members, including a young woman who shared her challenges of not being able to tell the color of one hijab from the other based on touch.

“We were fascinated by the question of how you would describe color if you couldn’t see it,” said Aldash, who currently works as a digital assistant for the global media company WarnerMedia in Dubai.

“Our initial idea was to in some way adapt the cane, which many visually impaired people rely on. However, after interviewing the members of the EAVI it became clear that they were really seeking a more discreet solution that didn’t draw the same attention that a cane often does. This is how we came up with the concept of Touch—a smart accessory that would give visually impaired individuals the ability to independently and discretely experience color,” said Aldash.

Aldash and Moustafa developed their project concept on campus at AUS in 2019 by creating a series of prototypes in CAAD’s labs, which are considered the most comprehensive design labs in the region.

“I think we used all of the labs at CAAD to come up with the final design, including the woodshop and the CNC laser cutter,” said Moustafa, who is a motion graphic designer at Al Aan TV, also in Dubai.

“We are very grateful for Professor Gmeiner’s support and his encouragement to make our submission for the James Dyson Award. He advised us to meticulously document every step of the process, ensuring we had a record of every design option we considered as well as the process that led us to the final prototype,” said Moustafa

“Our aim was to create something that could be both functional and feasible, and that would ultimately help people,” said Aldash.

While Touch is not yet functional, Aldash and Moustafa are now looking at how they can develop their product so that it can become a feasible, marketable product, and are also considering options for expanding the brand to include different kinds of accessories.

Gmeiner’s former student Arpana Murugappan followed the same process in developing her interactive yoga mat, Grounded. The young designer was inspired by her father’s need for healthy work-life balance and sought to find a solution that ensured wellness could take a permanent place in the home and daily experience.

Murugappan’s design doesn’t take the same shape or form of a traditional yoga mat but has been modified in consideration of the range of motion the human body requires to perform yoga. The solar-powered mat is both decorative and functional, providing intelligent cues for the user that are activated by touch. Like a modified game of Twister, the mat lights up to guide the user into the right poses. Murugappan also plans to further develop her product’s functionality and design in order to both market it and learn from users’ experiences for future product development.

Dean Pallathucheril congratulated the three designers, saying, “While the James Dyson Award has traditionally celebrated and encouraged design engineers, it is particularly exciting that this year’s winners and runner-up are multimedia design students from CAAD.

“This is a significant achievement as it indicates the value that designers bring to the market and affirms how much our students benefit from the emphasis we place on design thinking and learning by making,” he said.

To view the final submissions for Touch and Grounded, visit www.jamesdysonaward.org.

For more information about the College of Architecture, Art and Design’s award-winning alumni, visit www.aus.edu/caad.