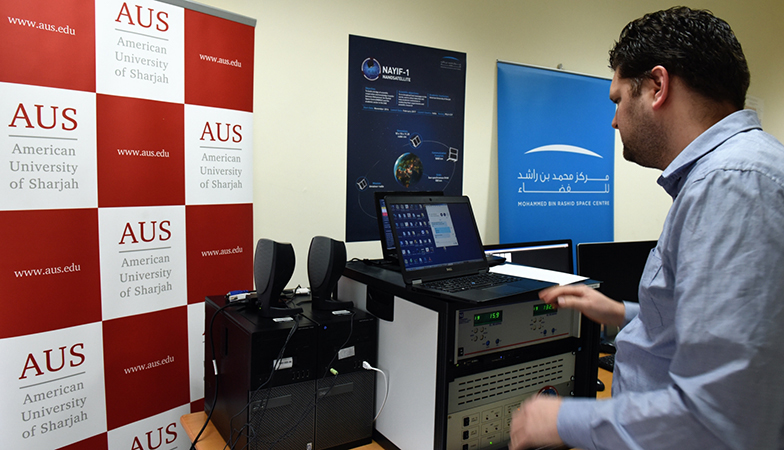 This week is a momentous one for the UAE, as the country sees its first astronaut launched into space for eight exciting days. Like the rest of the country, American University of Sharjah (AUS) is celebrating this milestone, and eagerly awaiting the safe return of the first Emirati to enter space, Hazzaa Al Mansoori. Along with his fellow flight participants, cosmonaut Oleg Skripochka of Roscosmos and astronaut Jessica Meir of NASA, Al Mansoori is bound for the International Space Station as part of a collaboration between the Russian Space Agency and the UAE’s Mohammed bin Rashid Space Centre (MBRSC).

For AUS, this national triumph is a source of much pride, and an opportunity to inspire a future generation of space pioneers. The university has enjoyed an active role in the country’s space endeavors, being a partner of the MBRSC. AUS students—enrolled in engineering and science degrees— have the opportunity to intern at MBRSC, and become acquainted with what it is like working in the rapidly changing international space industry. AUS students were at the helm of the UAE’s first nanosatellite, Nayif-1, launched in 2016. The satellite was developed as a joint project between AUS engineering students at the MBRSC, with the satellite being monitored by a ground station located within the AUS campus.

Such hands-on experience well-equips AUS graduates for a future in the space industry. The MBRSC has seen a number of AUS graduates work within its walls, including Her Excellency Sarah Al Amiri, Minister of State for Advanced Sciences and Deputy Project Manager of the Emirates Mars Mission at the MBRSC. Her Excellency holds a bachelor’s degree and a master’s degree in computer engineering from the AUS College of Engineering. She has contributed significantly to the realization of some of the UAE’s scientific goals, working on projects including the satellites Dubai Sat-1 and Dubai Sat-2.

With the launch of a Bachelor of Science in Physics in 2018, AUS is broadening the way in which it is helping to fuel the UAE’s space efforts. Students of the program can expect to study in fields across astronomy and astrophysics, analyzing images of galaxies and stars. Graduates of the program will be well-placed to work on the Emirates Mars Mission.

For high school students keen to pursue a future career in space, and scale heights similar to those achieved by Al Mansoori or Al Amiri, AUS encourages them to pursue their passion in engineering, mathematics and the sciences. Dean of the AUS College of Arts and Sciences Mahmoud Anabtawi says:

“There are many different career options for those interested in space exploration. Graduates from a variety of fields can go on to occupy roles such satellite engineer, astrophysicist, or space entrepreneur. With the space industry in the UAE and abroad growing, there are many possibilities open to young people with an interest in space.”