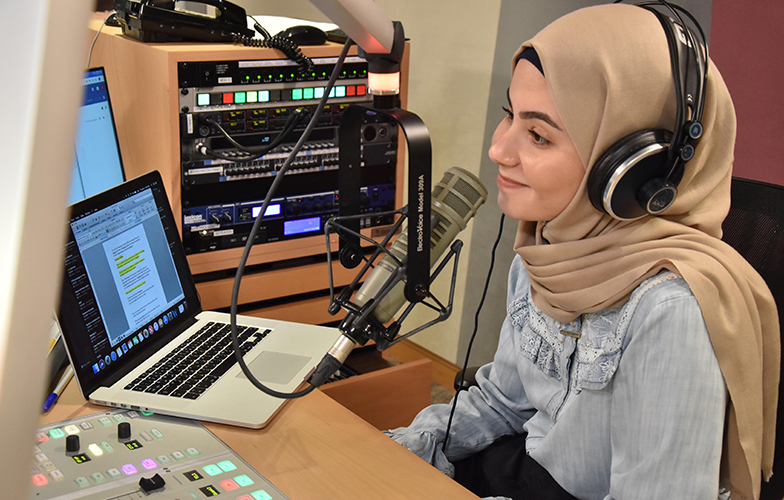 Employability is one of the major factors when students are deciding which university they want to attend and which field to major in at university. Both parents and students think about what may come out of their investment in resources, effort and time. Things were no different for Omnia Al Saleh, a final year student at American University of Sharjah (AUS) who is pursuing a Bachelor of Arts in Mass Communication, with a concentration in journalism and a minor in translation.

As a high school student, Omnia always knew she wanted to study in the fields of media and advertising in university. Having attended high school in Abu Dhabi, she was familiar with AUS and the programs the university offered, as well as other universities in the UAE. In fact, she was inclined to go to a different university at first, but one of the key aspects that attracted her to AUS was the employability factor, in terms of internships while studying and job placement after graduation. Although she was considering applying to what she thought was her first-choice university, Omnia reconsidered her choices when a relative recommended AUS to her due to AUSâ high employability rate as well as the flexibility of course choices, making it possible for students to pursue a minor, in addition to oneâs chosen major, simply by utilizing free electives. (AUS has 88 percent employability rate for its recent graduates.) That sold AUS to Omnia.

During her four years at AUS, Omnia has had several notable achievements under her belt including an internship as a journalist both at The National and at Sky News Arabia. Most recently, she also landed the role of co-host on Future Talk, Pulse 95 Radioâs tech show, covering everything from AI to robots and computer gaming. Since landing the role, she has made a significant impression on her listeners and employers alike, garnering a serious following from her listeners.

When asked how her journey at AUS prepared her for work placements, Omnia said, âAUS taught me to always be prepared, punctual and professional. It has also equipped me with time management skills and the ability to work under pressure.â Omnia also added, âThe facilities and technology that AUS provides for mass communications students was also a great advantage, as most employers test your soft skills before hiring you.â

How did it all start? During her third year of university, Omnia managed to secure an internship with The National as a journalist, with the help of faculty from the Department of Mass Communication at the AUS College of Arts and Sciences. Omnia wrote more than 10 feature pieces that were published by The National. While covering an event during her time at the newspaper, Omnia was introduced to Omar Al Busaidy, one of the Pulse 95 radio hosts. With some solid networking skills, she landed herself an interview for what she thought would be a producer role.

In preparation for her interview, she worked on a few story pitches that she thought would impress the team at Pulse 95. Omnia recalls, âOn the day of my interview I met with the team for my potential internship as a producer. Within the first 10 minutes of my interview, I was asked to go on live radio and introduce myself. It wasn't exactly what I had prepared for, but I still made it happen.â Omniaâs advice? âAlways do your research and be prepared, be persistent and don't be afraid of pursuing the roles you're truly interested in (even if they seem impossible).â

Things then progressed quickly and she was asked if she could develop the list of stories she had pitched. She soon found herself, as an intern, co-hosting Future Talk with Omar Al Busaidy, the host she was introduced to earlier. Omnia has been making waves at the radio since then, presenting relevant topics, hosting notable guests, engaging with her audience on and off air, and carving her mark in the Sharjah and UAE media space.

As to what advice would she give to current students and recent graduates, âMy first tip would be âdon't be discouraged!â There will be plenty of âno'sâ and irresponsive potential employers, don't let any of it put you down. Consider those rejections as a redirection to bigger and better opportunities. This is my firm belief, as I myself experienced it all during my internship hunt. I would also advise students to embrace the learning process at their internships. No employer expects you to know everything on your first day. You will make mistakes, and you will learn from them and develop your skills and knowledge further. Just do your best, and don't be too hard on yourself!â

Omnia adds that although employers have a positive perception of AUS students and graduates, she believes that the studentâs or graduateâs knowledge, social and professional skills, and attitude also play a key role in securing work placements. And while her journey at AUS as an undergraduate student is coming to an end, what lies ahead for Omnia is a bright and busy future.

So, whatâs next in store for Omnia? âI've been offered a full-time role at Pulse 95 based on my performance as an intern. I'm also considering continuing my education at AUS and pursuing a Master of Arts in Translation and Interpreting.â