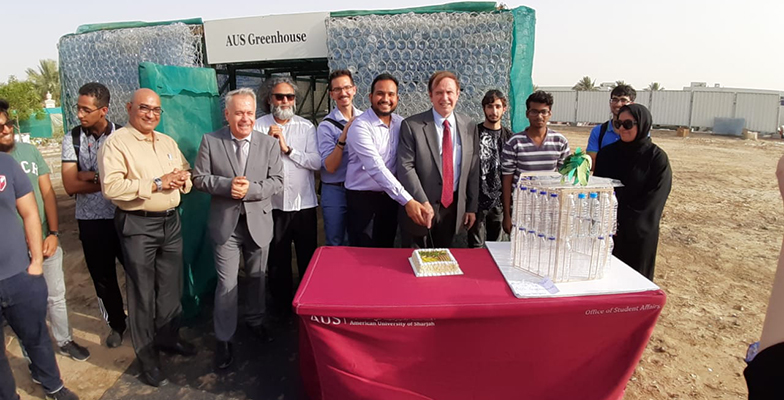 One of the marks of a true education is that it helps you to not only pass exams and get good grades in courses, but it also helps you to be a critical thinker with an analytical mind, and helps you solve real-life problems to improve your life and the lives of those around you. That is the kind of education that American University of Sharjah (AUS) strives to offer its students. Not only do students understand the subject matter, they are able to figure out how to apply what they learn to make a positive impact on the world around them.

May 3, 2019, marked the inauguration of the AUS Greenhouse, a first-of-its-kind, student-led project that took three years and 200 AUS volunteers to plan and build. Over 90 percent of the materials used to build the greenhouse were recycled, including more than 20,000 plastic water bottles.

When asked how the idea of the AUS Greenhouse came about, Zulfikar said, âI began volunteering with the AUS Community Services department in my first years at the university. In 2016, the department asked students to suggest ideas for initiatives that we could take on to benefit the AUS community. My idea was to create a sustainable greenhouse, made solely of recycled material found on campus. I began conducting research to assess the requirements and feasibility of the project with the help of several other members of the AUS community. After three years of negotiation, research, planning, collaboration and labor, I couldnât be prouder of the final result that is the AUS Greenhouse.â

The plastic water bottles that make up the walls of the greenhouse create significantly cooler temperatures for the cultivation of plants all year round, and enables other plants that wouldnât survive the UAE heat otherwise to be grown. For the moment, the greenhouse is yet to begin harvesting. However, Zulfikar spoke of plans to work with the Department of Biology, Chemistry and Environmental Sciences to decide what plants would be most suitable. âMaybe we can grow some watermelons,â he added.

âThe AUS Greenhouse Project has been my dream for the past three years. It took a long time because we were innovating a new design that was more suitable to this region, and we wanted to use recycled bottles that we collected from the AUS campus. I believe that this is just a start for this project, and it holds great potential for further experiments and learning,â Zulfikar added.

As an economics student, Zulfikar initially had no idea of what it took to complete such a project. The project attracted the interest of many people on campus and garnered the support of faculty, staff and students from the College of Architecture, Art and Design; the College of Engineering; and the College of Arts and Sciences, especially the Department of Biology, Chemistry and Environmental Sciences, as well as the Sustainability and Community Services departments.

Zulfikar and the team involved also managed to catch the attention of companies such as PepsiCo and EcycleX, both of whom provided them with additional recycled water bottles to build the greenhouse. The gabions* that surround the greenhouse were provided by construction companies such as Maccaferri and Links Middle East as part of their Corporate Social Responsibility (CSR) initiatives.

Although Zulfikar graduates this spring from AUS, he hopes he will still be able to support the initiative in an advisory capacity. âI believe the greenhouse has great potential to continue and scale up in the future. Iâm confident that both the AUS community and the Community Services department will safeguard and support the greenhouse in the coming years,â he said.

If you would like to find out more or volunteer for the AUS Greenhouse, please complete one of the following steps:

*A gabion is a cage, cylinder or box filled with rocks, concrete, or sometimes sand and soil for use in civil engineering, road building and landscaping.