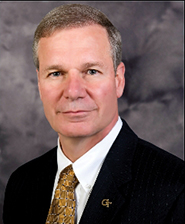 Dr. G.P. “Bud” Peterson is President Emeritus and Regents Professor of the Woodruff School of Mechanical Engineering at the Georgia Institute of Technology in Atlanta, Georgia, USA. He was appointed the 11th president of Georgia Tech on April 1, 2009. Upon his arrival at Georgia Tech, he led the campuswide development of a 25-year strategic plan, which has served as an important framework for many of the advancements and accomplishments during his tenure. Under his leadership, Georgia Tech exceeded the $1.5 billion goal for Campaign Georgia Tech by more than 20 percent, grew innovative collaborations and strategic partnerships, expanded the campus infrastructure, and increased the national and global visibility. Notably, in the past decade total research awards have almost doubled, undergraduate applications more than tripled and total enrollment increased by 69 percent (24 percent undergraduate and 159 percent graduate, respectively). In addition, both the ethnic and gender diversity of the undergraduate student population increased from 13.5 percent to 16.2 percent and 30 percent to 38 percent, respectively. Finally, the six-year graduation rate and first year retention achieved an all-time high of 87 percent and 97 percent in 2018, respectively.

Dr. Peterson came to Georgia Tech from the University of Colorado at Boulder, where he served as Chancellor. In his nearly three years as Chancellor, freshman applications increased by 35 percent, the number of underrepresented minorities in the freshman class increased by 38 percent, sponsored research increased by more than 18 percent, and private philanthropy for the university increased by nearly 80 percent. Prior to serving as Chancellor at CU, he served as Provost for six years at Rensselaer Polytechnic Institute (RPI) in New York, where he played a key role in the institutional transformation and the dramatic improvement in the faculty’s quality, size and diversity. His oversight of the hiring of nearly 40 percent of the faculty included increasing the total number of tenured and tenure-track faculty by 20 percent, and improving the diversity of the tenured/tenure-track, more than doubling the number of underrepresented minorities and increasing the number of women by 40 percent. In addition, during his tenure as Provost, the quality and diversity of the student body increased, and the number of full-time PhD students grew by 25 percent.

Prior to serving as Provost at Rensselaer, he was on the faculty at Texas A&M University for 19 years, where he held a number of leadership positions, including Associate Vice Chancellor for Engineering for the Texas A&M University System, Executive Associate Dean of Engineering, and Head of the Department of Mechanical Engineering. Prior to his service at Texas A&M, he served as a visiting research scientist at NASA-Johnson Space Center in Houston, Texas, and Associate Professor and Head of the General Engineering Technology Department at Kansas Technical Institute in Salina, Kansas. His early career included teaching mathematics, physics and chemistry at Shawnee Mission South High School in Overland Park, Kansas, and Wabaunsee County High School in Alma, Kansas.

Throughout his career, Dr. Peterson has played an active role in helping to establish the national research and education agendas, serving on numerous industry, government, and academic task forces and committees. He has served as a member of a number of congressional task forces, research councils and advisory boards, including the Office of Naval Research (ONR), the National Aeronautics and Space Administration (NASA), the Department of Energy (DOE), the National Research Council (NRC) and the National Academy of Engineering (NAE). In addition, he has served as a member of the Board of Directors and Vice President for Education for the American Institute of Aeronautics and Astronautics (AIAA), co-chair of the Government Relations Committee of the Association of Public and Land-Grant Universities (APLU) and as a member of the executive committee of the Association of American Universities (AAU). He is currently serving on the American Council on Education (ACE) Board of Directors and also serves as a member of the Knight Commission on Intercollegiate Athletics and as the chair of the NCAA Board of Governors, the highest governing body of the NCAA.

He is a fellow of both the American Society of Mechanical Engineers and the American Institute of Aeronautics and Astronautics, receiving the AIAA Distinguished Service Award in 2011. Dr. Peterson is the author or co-author of 17 books or book chapters, 240 refereed journal articles and 146 conference publications. He has 16 patents, with three others pending.