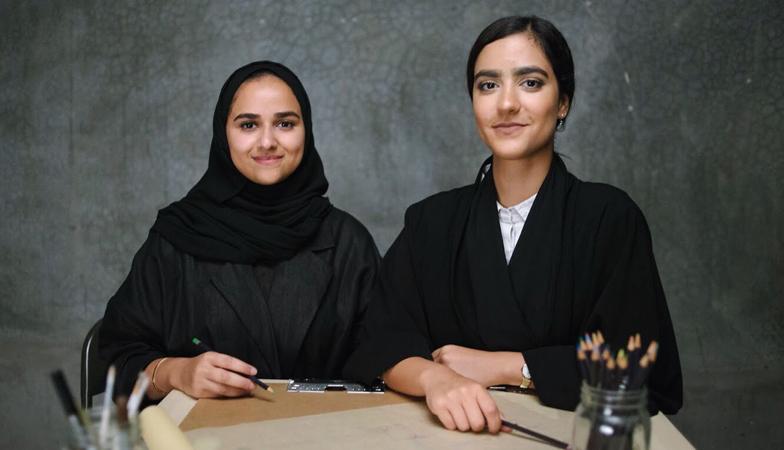 As part of its program to encourage and support creative talent in the UAE, the prestigious prize is an initiative inviting university students and recent graduates from across the country to develop an architectural design proposal for a pavilion and social hub at Abu Dhabi Art.

Al Khudairi and Al Mulla’s winning design will be unveiled during the fair from November 8–11 at Manarat Al Saadiyat in Abu Dhabi and will provide a space for galleries, collectors and artists to come together in an informal setting.

Speaking about the award, Dr. Varkki Pallathucheril, Dean of the AUS College of Architecture, Art and Design, said:

“This competition presented designers with an unusual opportunity; it not only called for design ideas but it gave the winning team the opportunity to realize their ideas. We, at AUS, are delighted and proud that Nada Al Mulla and Salwa Al Khudairi have been selected to exhibit their design. This is not the first time their ability to think creatively and bring ideas to life has been celebrated.”

"We are very grateful for this opportunity to create and showcase our work to over 20,000 visitors at Abu Dhabi Art and are honored that it will be installed at the British Ambassador’s Residence for two months afterwards. Winning the competition has nurtured our drive and ambition as designers. Through the Abu Dhabi Art Pavilion Prize, we were given the chance to utilize the education provided by AUS. We hope this will act as a strong foundation for our future advancement in the field of architecture.”

In line with Abu Dhabi Tourism and Culture Authority’s role as strategic partners of the UK/UAE 2017 Year of Creative Collaboration, the Architecture Pavilion Prize was launched in partnership with the British Council, who are leading the year-long festival under the patronage of His Highness Sheikh Mohammed bin Zayed Al Nahyan, Crown Prince of Abu Dhabi and Deputy Supreme Commander of the UAE Armed Forces; and His Royal Highness The Prince of Wales.