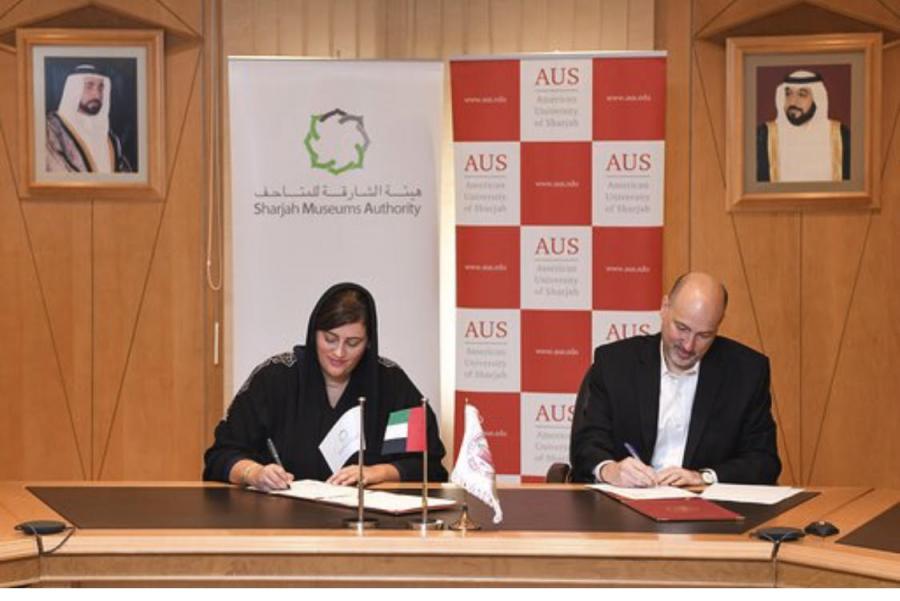 As part of Sharjah Museums Authority’s (SMA) commitment to working with universities and higher education institutions from across the country, SMA has signed an agreement with American University of Sharjah (AUS).

The memorandum of understanding that formalises a ten-year collaboration between the two organizations during which they worked on various projects, was signed by Manal Ataya, Director-General of SMA, and Professor Kevin Mitchell, Chancellor of AUS.

According to the agreement, SMA’s museums, libraries, projects, exhibitions, and its diverse collections from different areas of common interest such as archeology, contemporary art, Islamic art, heritage, and aviation, among many others, will provide resources to help enrich students’ knowledge and enhance their academic study and research as wells as their access to ideas and information.

Additionally, the MoU which reaffirms SMA’s commitment towards AUS, will allow both parties work over the long term with greater intensity on research-based projects through an exchange of visits, lectures, gallery discussions, access to resources and libraries as well as workshops, that will influence students to produce unique solutions to existing challenges related to their research and thus add more to both parties knowledge.

“I believe that for students to be more equipped for the job market after graduation, they need the practical experience that working with museums can provide,” said Manal Ataya.

She added that working with senior staff of various museum departments including research, design and project procurement allows students to work together with professionals who can show and guide them in a practical sense how to tackle particular issues related to their areas of study.

Chancellor Mitchell said a partnership between AUS and SMA presents unique opportunities for the university.

“AUS has benefitted tremendously from collaboration with SMA, which ranges from faculty engagement with the collections to student projects and exhibitions. Because SMA is responsible for a wide range of institutions, students from across many AUS majors are able to take advantage of the knowledge and expertise of museum staff and the numerous educational and cultural programs offered by the Authority. The university is fortunate to have such a strong relationship with SMA and we look forward to working together on future initiatives that will benefit students, faculty and the broader community.”

Previous cooperation between both organizations in 2014 saw the organizing of the two-day international symposium Islamic Civilization in the 21st Century: Global Perspectives.

The launch of an international cross-cultural conference last year--Storytelling, Travel Writing and Seafaring from Cross-Cultural Perspectives--brought together SMA, AUS and the Arab-German Young Academy of Sciences and Humanities.

Teaming up with SMA last April, students from the university’s College of Architecture, Art and Design (CAAD) created a remarkable exhibition of students’ works in celebration of UAE’s pearling industry.

Their latest cooperation and in conjunction with the launch of the T-Serai exhibition by artist Azra Aksamija, both parties have organised a workshop where AUS’s students were introduced to the appliqué technique and to the artist’s designs inspired by MENA region’s traditional tents. They were also provided an opportunity to create their own artworks using the same technique.