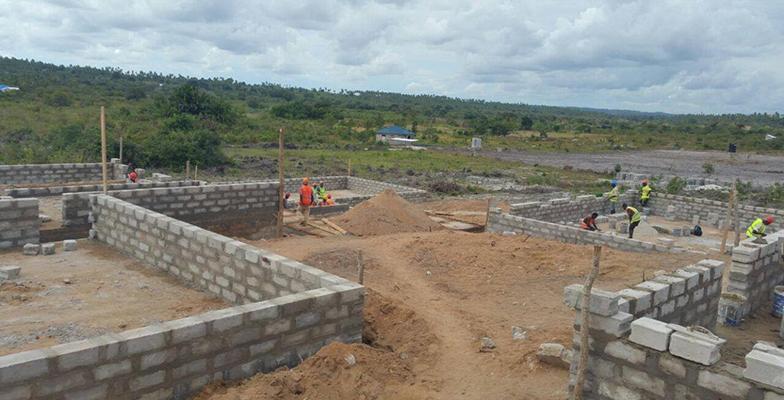 A group of orphaned children in Tanzania have been granted a new home, a new school and a brighter future thanks to faculty and students from the College of Architecture, Art and Design (CAAD) at American University of Sharjah who have spent the past four years designing and constructing new facilities for the Mkuranga Children’s Home and School.

The project, initiated in November 2014 and supported by the Larchfield Charity Organization, was designed to support 300 orphaned children from the Mkuranga District in the Pwani Region of Tanzania. Construction for Phase One of the project commenced in April 2016, bringing together local craftsmen and builders, and was completed this summer in order to accommodate the first group of 60 children.

A team of architects, designers and students from AUS was assembled by Professor George Katodrytis, Head of the Department of Architecture at AUS, and Professor Kevin Mitchell, Vice Provost for Undergraduate Affairs and Instruction and faculty member in the Department of Architecture. They were joined by alumnae Sharmeen Syed and Samar Halloum to design and create the orphanage, which they saw come to fruition this summer.

Professor Katodrytis led the project in his capacity as founding member of the Open Source Architecture initiative—a non-profit design collective of architects, engineers and designers engaged in creating platforms and programs for like-minded design professionals to collaborate on goodwill projects by contributing skills, research, design services, knowledge and expertise, with a focus on sustainability.

Reflecting on the four-year-long process, Professor Katodrytis said the project was not without its challenges, but affirmed that the opportunity for AUS architecture students to create such a significant impact on the lives of these children was invaluable.

"Designing in areas of limited resources requires intelligent decisions and is meaningful compared with those in abundance of technology and wealth. We created lines connecting the lives of young people in Tanzania that we have never or will ever meet with those young designers here and kept the promise of a better future alive through architecture,” said Katodrytis.

The first phase of the project included the completion of four large accommodation units for the children of Mkuranga and an additional four caretakers’ units. Two of these buildings will be used as a temporary classroom and kitchen until larger, more permanent facilities can be completed in the next phase of the project.

“The project will evolve depending on available funds. The plan is to construct a series of clusters of four accommodation units on the site for all 300 children. Each building has the capacity to accommodate 15 children,” said Katodrytis.

“No specific date has been set for any future expansion. As you can imagine, fund raising has been challenging in the last few years but now that the pilot scheme is on site we expect that this process will be easier,” he said.

Professor Mitchell said, “Initiatives like Open Source Architecture, and specifically the Mkuranga Children’s Home and School project, highlight the role that architects and designers can play in improving lives through collective action and collaborative work."