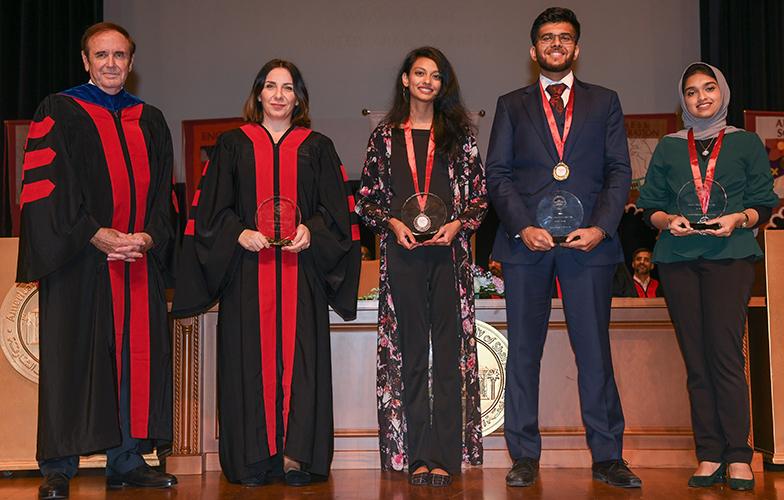 American University of Sharjah (AUS) celebrated 455 of its top students for their academic achievements at its Annual Honors Convocation held on October 31.

Gold awards, which represent being recognized at the Honors Convocation for the third or fourth time, were awarded to 94 students while 132 students received the Silver awards, which represented a second recognition. A total of 229 were presented with Bronze awards for their first year on the prestigious list. Out of the total number of students honored this year, 277 were female students and 178 were male.

“The university scholarships and awards are a way to motivate students to achieve their goals. These could be for achieving a certain GPA, participating in extracurricular activities or even representing AUS in competitions. Such recognition gives pride to students for what they have achieved and may also inspire others to work towards their goals.”

Among the honorees were four outstanding students who were awarded of the Sheikh Khalifa Scholarships. Awarded to juniors and seniors, this recognizes academic excellence, leadership potential, service to community, demonstrated talent in the field of study and participation in extracurricular and university activities. Given through an annual competition conducted within each college/school, it is granted for up to four consecutive semesters or until graduation requirements are complete.

“When I got the call that I got the Sheikh Khalifa Award, I was overwhelmed. This was the first time I saw my entire family cry in joy. It was an amazing moment where I genuinely felt proud of myself and gave myself a pat on the back for pushing myself to apply for the scholarship and receiving it,” said Bokhari, a mass communications senior.

“I think scholarships are extremely important. We work very hard to not only to maintain our grades but also simultaneously try to remain active in student life. To achieve academic excellence, we push ourselves to the limits. This is why I think it’s important to recognize students’ achievements not just for the work they do but for their friends and family, who play a big role as their support system throughout their entire journey,” she added.

The Honors Convocation recognizes and celebrates the achievements of students who attained a GPA of 3.5 in Fall 2018 and Spring 2019, qualifying them for inclusion on the Chancellor's List. In addition, the students must have been registered in a minimum of 15 credit hours, had no incomplete or failing grades in any courses and had no disciplinary action against them.

Finance senior Lamiah Koduvayakkal has been a recipient of the Chancellor’s Scholarship since she joined AUS and is now also the recipient of the Khalifa Scholarship. She said, “It was unexpected but very rewarding. It motivated me to achieve more. I have actually been talking to freshmen and sophomores about the importance of pushing themselves to achieve such rewards.”

She added, “There are so many challenges in the job market these days, and having a scholarship is both a reward for the hard work we put in as well as an incredible way to ease the financial burden on families, thereby allowing students who may not have the means to study at AUS to realize their dreams. I have seen how hard students work to get into international internships and build a fantastic portfolio and it is important to recognize that.”

Taha Ameen ur Rahman, an engineering senior and winner of the Sheikh Khalifa Award, said that his time at AUS has offered a wide range of enriching experiences:

“Over the course of the last four years, AUS has provided me opportunities over the entire spectrum of student experience, ranging from research openings to community service. I have had the opportunity to not only pursue international research internships and present conference papers abroad, but also to lead student chapters at AUS and serve as a peer advisor at the Academic Support Center. All these experiences provided me with a broad range of insight, and I am extremely grateful to the university for supporting my journey.”

The university’s College of Engineering had the largest number of distinguished students represented at the convocation with 232 students; followed by the School of Business Administration with 117 students; College of Arts and Sciences with 61 students; and College of Architecture, Art and Design with 45 students.

AUS ensures that financial means do not become a hindrance for qualified students to get the best education they deserve. With a scholarship fund valued at AED80 million, merit scholarships and need-based financial grants benefit approximately two-thirds of all AUS students each year. Scholarships are available to all students, regardless of race, color, gender, religion or national origin.