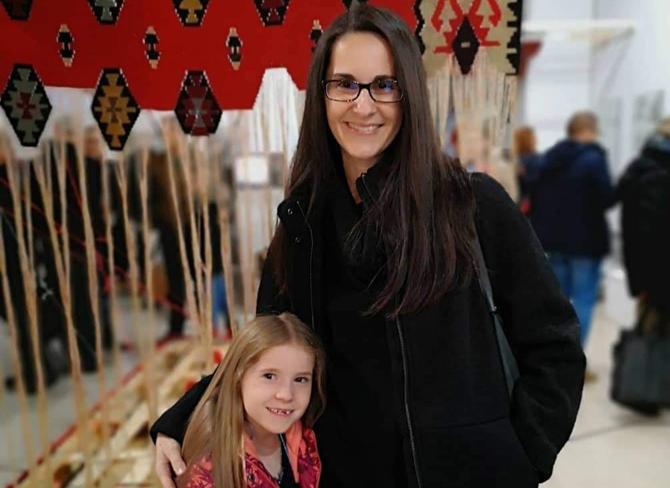 Sharjah, UAE. December 5, 2018—Foundations instructor Selma Ćatović Hughes from the College of Architecture, Art and Design (CAAD) at American University of Sharjah (AUS) has returned from her home town of Sarajevo following the opening of her installation Unraveled: Life Under the Siege at the History Museum of Bosnia and Herzegovina, a post-war reflection of her childhood.

The installation is part of a group exhibit, Reconciliations 2, which is the second installment of a larger project entitled Art & Reconciliation: Conflict, Culture and Community, coordinated in collaboration with King’s College London and the University of the Arts in London.

The exhibition seeks to provide artists with a platform to communicate the impact of war, specifically the Siege of Sarajevo, which ravaged the city from 1992 to 1995. Ćatović Hughes was one of the artists selected to share her own experiences (of post-war trauma) from both an individual and community perspective, in an effort to explore how artists can serve in the process of reconciliation in the Western Balkans region.

The siege began on Ćatović Hughes’ 15th birthday and, like many teenagers, she kept a journal during this time.

One particular journal excerpt from March 1993 reads: “...I was reading my old journals yesterday and I got depressed. It used to be so good—we were free. Now we live in one giant prison. Everything is limited and predetermined: food, movement, electricity, water, phone, gatherings. Everything. After all, our life is predetermined and limited. Either you’re gonna live or you’re gonna get killed. There is no third. This is some inconceivable madness. Is it ever going to end? When? And when it does, what is going to happen with all of us and our destinies?...”

Reflecting on this unraveling of her pre-war life and the reconstruction of life after the war, the artist has created a powerful installation of a traditional carpet, suspended from the ceiling, unraveling before the audience’s eyes. The unraveled threads are wound around nails on a wood platform, representing interconnections and voices of memory, both literal and phenomenal.

“When conflicts escalate into wars, and the wars go on for years and eventually end, the immediate post-war reconstruction takes over. Schools, hospitals and homes are repaired, usually to their original condition, masking any signs or traces of the disastrous events, sadness and human struggle. Is it possible to re-condition something (building, space, soul) to be the same, to feel the same, when it had been wounded, destroyed and deeply scared on the inside? Is there a clear boundary between lives and spaces before the war, under the siege and of the aftermath?” Ćatović Hughes said.

The intent of this art installation is to show the intricacy of the impact of the war circumstances not only have on one person, but rather on an assembly of lives that come together as one whole. Celebrating  Bosnian cultural heritage of carpet weaving, the threads become the voices of memory. The process of weaving combines numerous pieces carefully constructed into a cohesive and unified composition, the whole. To create a woven piece like a carpet, it takes time, ritualistic order, repetition and predetermined idea of an outcome.

“When the unraveling begins, it is undoing everything the long process of weaving had accomplished but at much faster pace. The threads separate, shapes dissolve and become illegible new forms, and colors bleed independently upon the taut white vertical threads as a ghost background,”  Ćatović Hughes said.

Art & Reconciliation: Conflict, Culture and Community was curated by Elma Hodzic from the History Museum of Bosnia and Herzegovina in Sarajevo, and includes 10 international and local artists, including the former prosecutor from the International Criminal Tribunal (ICT) and the former official photographer at the Hague war tribunal.

“I was humbled to be in the same room with such a diverse group of people with a wide range of life and work experiences,” Ćatović Hughes said.

Unraveled: Life Under the Siege can be viewed by the public until at least December 31, with some artworks under consideration for the museum’s permanent documentary collection and artifacts from the 1992–1995 Siege of Sarajevo.

For more information about the College of Architecture, Art and Design and its outstanding faculty, visit www.aus.edu/caad.