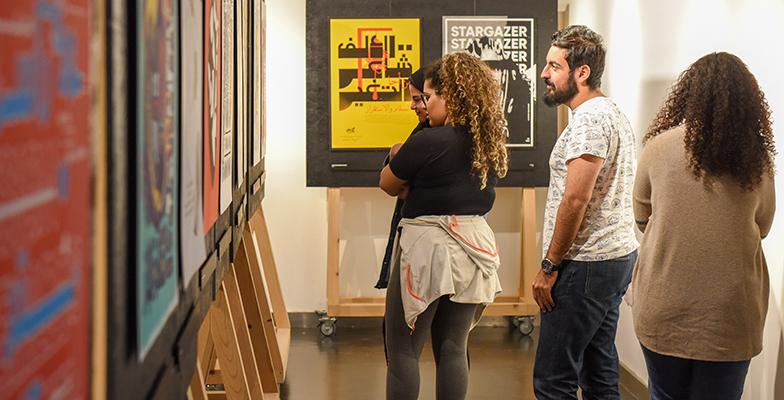 AUS hosts exhibition of award-winning posters from the Arab world

The highly acclaimed 100/100 Hundred Best Arabic Posters exhibition opened at the College of Architecture, Art and Design (CAAD) at American University of Sharjah (AUS) this week, featuring award-winning graphic design by artists from throughout the region.

100/100 Hundred Best Arabic Posters, which has successfully toured Cairo, Amman and Abu Dhabi, is a biannual competition that celebrates the diversity of visual cultures by collecting and choosing the best posters from across the Arab world. AUS is hosting the exhibition with the support of Abu Dhabi’s Warehouse 421.

Zlatan Filipović, Associate Professor and Interim Head of the Department of Art and Design at CAAD, said initiative plays a significant role in preserving the visual culture represented through posters and further empowers graphic designers to continue their practice in the region.

“This exhibition spreads knowledge about current graphic design practices in the Arab world, with a specific focus on visual design and the language of posters—something that Arab cultures have contributed to, both historically and contemporarily, in a way that goes beyond the visual,” said Filipović.

“This is an important exhibition to host at CAAD, as it empowers and encourages design practice and celebrates the extensive pool of talent within the region—some of which has been nurtured in our very own design studios at AUS,” he said.

“With such a high quality of work on display, we are delighted to see our own talented students, alumni and faculty represented in this exhibition,” said Filipović.

The exhibition will be held within CAAD’s regionally renowned facilities on campus at AUS, and will be open to the public until Saturday, March 9.

For more information about the College of Architecture, Art and Design visit www.aus.edu/caad.