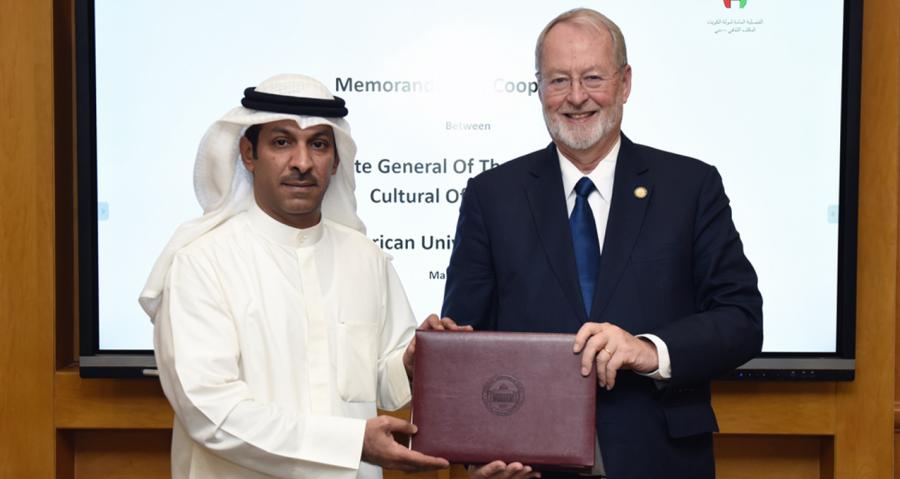 To enhance mutually beneficial ties between American University of Sharjah (AUS) and the Ministry of Higher Education in the state of Kuwait, a Memorandum of understanding (MoU) was signed between the two entities today, March 14. The agreement was signed by Dr. Björn Kjerfve, Chancellor of AUS, and Dr. Mordhi Obaid Ayash Alenezi, Counsellor and Head of the Cultural Attaché Office in the Consulate General of the State of Kuwait in Dubai, at a special ceremony held at the AUS campus.

The MoU seeks to establish a general framework for cooperation between the two entities and consolidate their efforts to support students sponsored by the State of Kuwait to study at AUS. The agreement envisages both parties to provide a commitment to a number of important provisions such as: agreeing on a number of seats to be allocated for students who receive scholarships from the State of Kuwait every academic year, with both parties determining the majors in which these scholarship students will be admitted; AUS admitting students who don’t achieve the required level of English proficiency to the Bridge Program offered by its Achievement Academy; and students who achieve the required level of English proficiency and successfully complete the requirements of the Bridge Program matriculating into the academic degree programs the following semester; among others.

“This MoU between AUS and Kuwait’s Ministry of Higher Education is a reflection of the stellar reputation AUS enjoys in the region. We are pleased to play our role in helping educate and train qualified, bright students from Kuwait who will, hopefully, go on to become an important part the region’s future leadership. We look forward to welcoming these students on campus soon.”

“We are happy to sign the MoU with AUS. Kuwait’s Ministry of Higher Education is very selective when it comes to partnering with universities. But knowing that His Highness Sheikh Dr. Sultan bin Muhammed Al Qasimi, UAE Supreme Council Member and Ruler of Sharjah, is the founder of AUS and to see his vision reflected in the university’s academic excellence and research potential provides us great confidence.”

As AUS moves towards becoming a research university, it continues to build on its liberal arts foundation and reputation as one of the region’s most sought after institutions of higher learning.