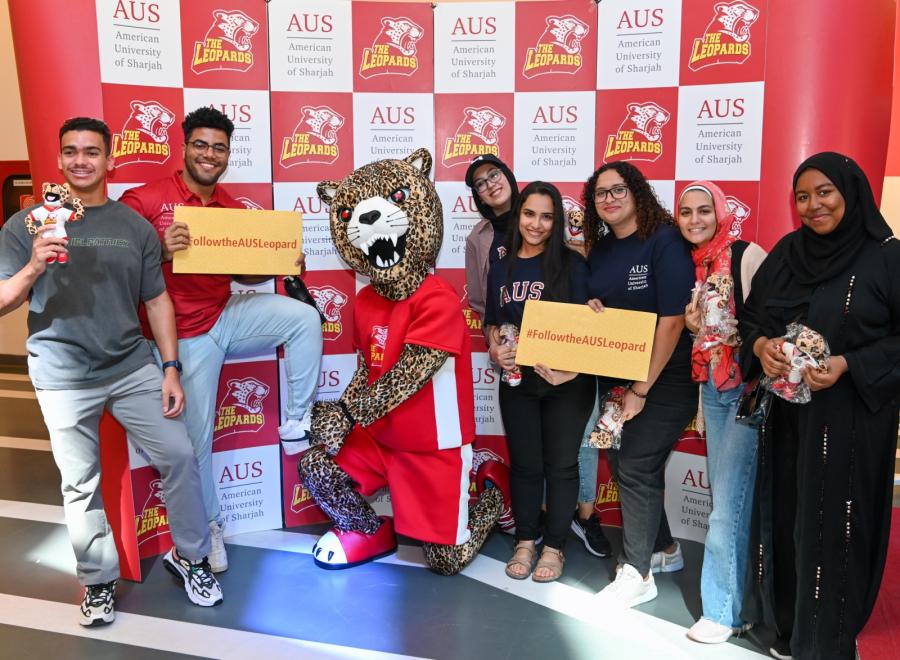 As part of its Silver Jubilee celebrations, American University of Sharjah (AUS) began a new tradition to ignite team spirit at its inaugural AUS Leopards Day on Thursday, November 17, 2022.

Hosted by the Office of Student Affairs in celebration of the university’s mascot, AUS Leopards Day was celebrated as a campus-wide event involving students, faculty and staff who wore team colors and their official AUS merchandise for the occasion.

Dr. Lisa Moscaritolo, Executive Director of Student Experience at AUS, said the launch of an annual AUS Leopards Day provides an opportunity for the whole campus community to come together and celebrate the spirit of AUS.

“AUS is an incredible place to work and learn, and we all find a great deal of joy in calling ourselves ‘proud AUSers’,” said Dr. Moscaritolo.

“Creating new traditions such as an annual AUS Leopards Day builds a real sense of community and provides the opportunity for us to express collectively what it means to be living out the vision of our founder,” she said.

One of the highlights of the afternoon included the unveiling of the new-look AUS Leopard mascot. The AUS Leopard has been the AUS mascot since the university opened in 1997, a nod to the critically endangered Arabian leopard species, which is protected by the Government of Sharjah.

Captain of the AUS basketball team and senior mechanical engineering student Malick Cisse said a vibrant team spirit makes a huge difference to him and his team members.

“As an athlete, there is nothing more motivating than having the respect of my peers, the support from our fans and the love we receive from our fellow Leopards. It really is almost rejuvenating in a sense. The camaraderie we share as Leopards is second to none, and all AUS teams never fail to keep their spirits high,” said Cisse.

“I know I am representing not just a brand or an organization but AUS, which has become a family to me and all our Leopards. There is no greater honor and it helps me bring my A-game to the court every single time,” said Cisse.

Zaid Alani, who is pursuing his Master of Science in Biomedical Engineering while leading the AUS soccer team, sees the strong value of maintaining a sense of university pride.

“Feeling that team spirit between all of us is what drives us to keep working hard and thrive for great achievements,” said Alani.

“I’ve always felt pride in playing for the AUS soccer team and representing such an esteemed university,” he said.

To continue building the AUS team spirit online, OSA also gave away 300 limited edition miniature leopard mascots as part of a student photography competition—Follow the AUS Leopard. Participating students will share photos of their leopard mascot plushie toy appearing in locations around the UAE and beyond using the hashtag #followtheAUSleopard between November 17, 2022 and January 31, 2023 for the chance to win a series of prizes.