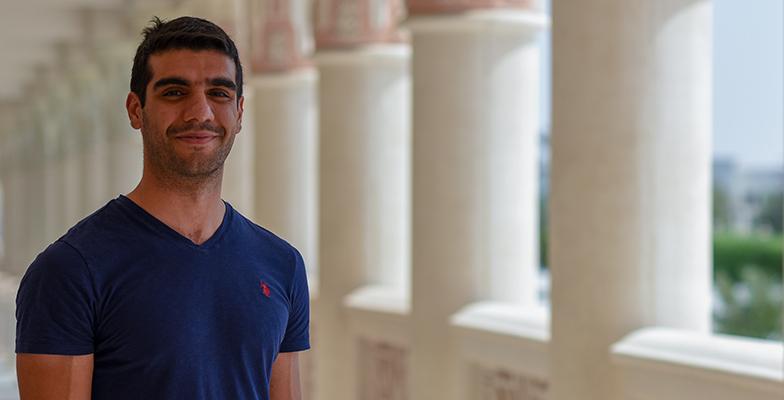 An American University of Sharjah (AUS) graduate is breaking new ground in the field of renewable energy research by examining energy storage systems that aim to generate power and electricity at a large scale with zero carbon emissions.

Already an accomplished researcher at the age of 28, AUS alumnus Mohammad Saghafifar has 19 published journal papers that were featured in seven international and national conferences, and two book chapters in the field of energy generation. His work covers areas of solar air conditioning, power plants and new technologies, and energy and the environment.

“My research looks at storing energy. Look at the solar power as an example. While it is helping us generate electricity, we still lose a lot because we do not have proper storage systems that would capture it in its entirety and allow us to use it,” said Saghafifar, who is currently pursuing his PhD at Cambridge University.

The researcher graduated from AUS with both a Bachelor of Science and Master of Science in Mechanical Engineering. “My current research is an extension of what I worked on as a master’s student at AUS. I researched power generation during my graduate studies, and now I am examining means to store it. This is a new field, which makes it challenging, especially when we start moving from theory to practice,” he said. “This region is a perfect place to implement energy storage systems because of the abundance in solar energy, but it is not my only target.”

His time as student in the AUS Master of Science in Mechanical Engineering program proved very fruitful, with Saghafifar co-authoring 15 journal articles during that period. “One piece of advice I would give students who want to pursue this field or any other field is to start their research early. I consider myself late when I started working on my research. I would tell anyone who is interested in research to start as a junior or senior at the undergraduate level.”

Saghafifar noted that his years at AUS were vital in shaping his work. “I worked very closely with my advisor at AUS and co-authored many of the journal articles with him. The discussions I had with him as well as other colleagues who worked also in the field of energy helped hone my thinking and approach. I also had an opportunity to work as a Graduate Teaching Assistant when I was a master’s student at AUS, which allowed me to work with undergraduate students,” he said.

Saghafifar is expected to complete his doctorate by 2020, after which he is planning to move away from academia. “I am going to be looking at start-ups in the field of energy and see where that will take me,” he said.