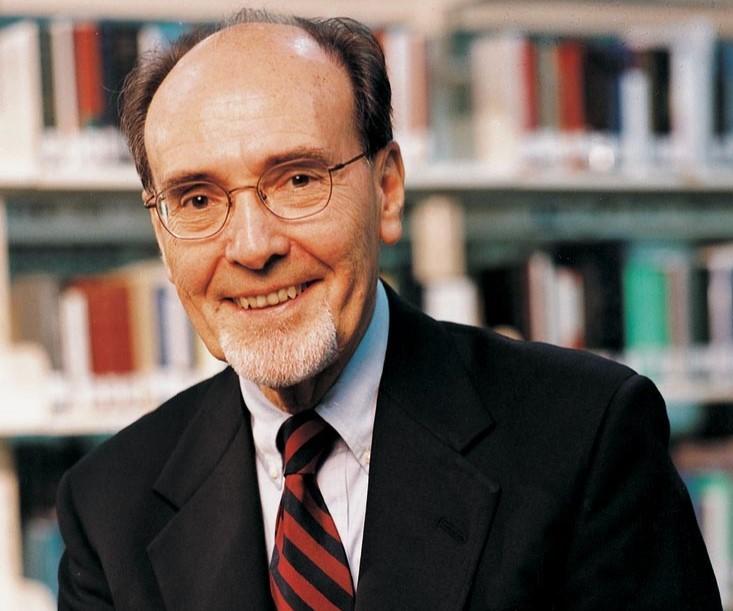 The AUS community is paying tribute to the life and work of Dr. Roderick “Rod” French, the founding Chancellor of the American University of Sharjah (AUS). Dr. French passed away on June 23, 2022 at the age of 93.

Dr. French made significant contributions to fulfilling the vision established by His Highness Sheikh Dr. Sultan bin Muhammad Al Qasimi, Member of the Supreme Council of the United Arab Emirates, Ruler of Sharjah and President of AUS. Trustee Mr. Hamid Jafar, who was instrumental in recruiting and hiring Dr. French, said, “He immediately stood out as the perfect fit for undertaking the challenging task of implementing His Highness’ pioneering, almost revolutionary coeducational university vision for the region. Dr. French achieved this highly important task faultlessly yet unassumingly, and often at times through sheer persistence and determination, while remaining sensitive to the local culture. These were rare qualities that His Highness The Ruler has repeatedly lauded over the years, long after Dr. French’s departure. His legacy at AUS remains to this day.”

Former Trustee Lord Alec Broers said that Dr. French's appointment by His Highness was of extraordinary importance. He said: “He established a culture that ensured excellence in every aspect of the new university’s endeavors to realize the Ruler’s vision. At the same time, the warmth of his personality and his concern for the welfare of students, faculty and staff alike meant that he was liked and respected by everyone. He made it a privilege for everyone to be a part of AUS.”

During his first meeting with the AUS faculty in November 1997, Dr. French stressed his dedication to working with the university community to develop the means of achieving the goals established by His Highness Sheikh Dr. Sultan bin Muhammad Al Qasimi, Member of the Supreme Council of the United Arab Emirates, Ruler of Sharjah and President of AUS. In an address to the faculty at the end of his first academic year as Chancellor, he said, “An abstract commitment to excellence cost one nothing. It is the methodology for the achievement of excellence that costs one. It costs time and energy and imagination and persistence.”

Dr. French consistently demonstrated a commitment to the values that he deemed important for AUS graduates, which he outlined in an address in February 1998: “[…] they must believe that knowledge is superior to ignorance; they must believe that rational argument and debate are ways of resolving disagreements superior to force or arbitrary authority; they must believe that an informed and sympathetic understanding of the cultures of other people in other times and places enhances rather than diminishes one’s respectful understanding of one’s own culture.” The importance of an understanding of the world that transcends narrow specialization was evident in the foundation that Dr. French established for the integration of professional education and liberal studies across the university’s academic programs.

AUS benefitted tremendously from Dr. French’s extensive academic experience, administrative acumen, humility, and devotion to building an inclusive academic community that valued the contributions of all its members. “He instilled a sense of purpose and demonstrated the utmost respect for the important roles that faculty, students and staff play in building an institution and advancing knowledge,” said former Chancellor Professor Kevin Mitchell. “He was insistent on maintaining academic rigor while providing the support to facilitate students’ transition to an American model of education that was novel in the Gulf region when AUS was founded. On a personal level, Dr. French was instrumental in my decision to become involved in administration, and he remained a role model and mentor to me and many of my colleagues both during and after his period of service at the university.”

Following his retirement as Chancellor in 2002, Dr. French was appointed to the AUS Board of Trustees and served in this capacity until 2015. Baroness Dr. Onora O'Neill, Professor Emeritus at Cambridge University and former Trustee, said, “He brought clarity and ambition to realizing the Ruler's vision for AUS. Whether the task was building the campus, setting high academic standards, recruiting students and faculty internationally, or working with dispersed trustees, Rod brought energy and good judgement to ensuring that it was done, and done well.”

Dr. French earned an undergraduate degree in philosophy from Kenyon College, a Master of Divinity from the Episcopal Theological School, a Master of Sacred Theology from Union Theological Seminary, and a Ph.D. in American Civilization from The George Washington University (GW). Upon the completion of his doctoral studies, Dr. French joined GW as a faculty member in philosophy and served in several administrative roles, including Vice President of Academic Affairs from 1984 until 1995. After working with the University Honors Program and serving as faculty adviser for a GW undergraduate research journal, Dr. French was appointed AUS Chancellor in 1997. In recognition of the significant contributions that he made to AUS, he was conferred the title Chancellor Emeritus by the Board of Trustees.

Dr. French is survived by his wife, Sally, and his children, Erick and Sarah.