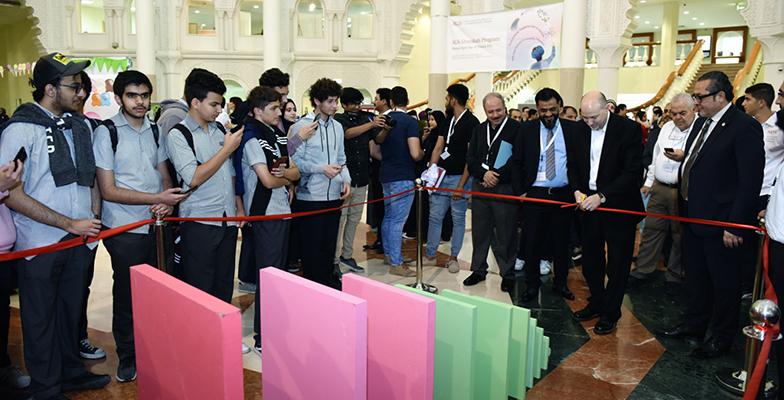 More than 400 high school students and supervisors from 14 Sharakah partner schools attended the annual American University of Sharjah (AUS) FUNtastic FZX, a day-long physics fair, held on campus on Thursday, February 22, 2018. FUNtastic FZX sought to bridge the gap between the university and high school students, to show that physics can be fascinating and to provide the fundamental understanding of how most things around us work.

The event was part of a physics open day organized by the AUS Office of Enrollment Management in collaboration with the Department of Physics. It welcomed prospective students from Sharakah schools and included interactive lectures, live displays, hands-on activities, competitions and demonstrations of physics principles and their wide applications.

Dr. Ali Alnaser, Head of the Department of Physics at AUS, spoke about the aim of the event and said:

“We are delighted to have a great number of students from Sharakah partner schools. This event is organized to encourage and raise awareness among high school students about the importance of sciences in general and physics in particular. The UAE is heading towards many initiatives were physics graduates are needed such as in the space sector."

“If you are considering studying physics or other fields to improve your understanding of the world, think about joining us here at AUS. We are proud of our graduates who are leaders in their fields. A graduate of AUS is currently the UAE Minister of Science.”

The event was held as part of the Sharakah program under which AUS has signed Memorandums of Understanding with a number of secondary schools in the UAE whereby the university will offer workshops to teachers and students; offer patronage of selected research, cultural, social and sporting activities and events organized by the Sharakah partner school; award partial scholarships to deserving students selected from lists provided by the schools; and offer university preparation courses, including SAT and TOEFL preparation courses, as well as recruitment of outstanding students from varied sociocultural and economic backgrounds to AUS.

A competition was held among the participating schools and the winners were Victoria English School. Second place went to Dawha School, and third to International Community School. The judges evaluated the teams’ projects according to the following criteria: clearly explaining the physics concepts behind the project and how they relate them to physics facts and laws learned at school; clearly explaining the goal of the project and the relevance of their project to practical applications; evaluating the team’s poster in terms of design and information, reflecting their creativity and own thinking; and finally, explaining the role of the elements and the materials used and the procedures followed to construct their project.