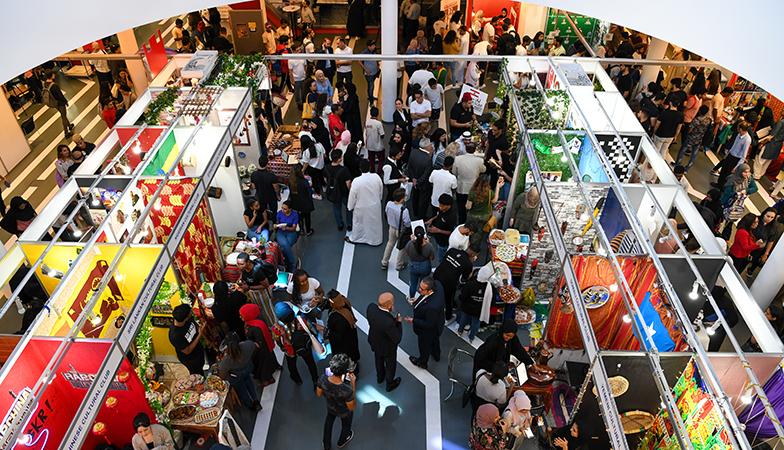 Held at the beginning of every semester, the Club Fair aims to introduce students, especially freshmen, to the university’s multinational ethnic and interest-oriented clubs. The event provides students with an opportunity to take pride in the cultural heritage of the many nationalities represented on campus. Known internationally for its diversity, AUS has students from more than 90 nationalities currently enrolled.

The opening day of the two-day event was attended by a large number of students, as well senior university officials. Commenting on the event, Abdulrahman Al Janahi, President of the AUS Student Council, said:

Standing at the Industrial Engineering Club booth were three freshmen playing one of the games facilitated by a member of the club. The freshmen majoring in finance, literature and business management were touring the Club Fair to see what piqued their interest.

“I have signed-up with five clubs so far and I’m just getting started,” said Priyanshu Sheth, a first-year finance major. “I am looking for clubs where I can find people from different cultures.”

Freshman literature student Yara Abu-Laban had already signed up for three clubs. “I signed-up with the Book Club, Palestinian Cultural Club and Jordanian Cultural Club. I am really looking for people who share similar interests and whom can I connect with,” she said.

Signing up with the Astronomy Club, Amaan Shad, a business management freshman, said he was looking for opportunities to meet new people and learn more about their cultures.

The Emirati Cultural Club booth was buzzing with activity at the Club Fair. President Mohammed Al-Nuaimi said this year the club is looking at diversifying its membership. Speaking about the importance of joining cultural clubs on campus he said:

“There is a lot to learn by joining these cultural and interest-oriented clubs on campus. You gain a great deal of experience, you grow as a person and you learn about other cultures.”

The Table Top Games Club is one of the new organizations that was launched this year. Club president Faris Kazim explained the inspiration behind its establishment:

“The focus of our club is on any game you can play on a table top like board games such as chess, monopoly and even games such as dungeons and dragons that would prompt people to be creative and tell stories. It started because I had a passion for such games and I wanted other interested students to join. These games are meant to help student develop critical thinking, decision making, planning and also bring out their artistic side through acting and story-telling.”

“It is so exciting to see students prepare their stands for Club Fair. This is one of the many platforms by the Office of Student Affairs to introduce students to the extracurricular opportunities offered by the university. A colorful and lively event, Club Fair promotes a vibrant student life and allows participating students to enhance their skills in teamwork, planning, organizing and financial management. The event reflects the diverse culture and interests at AUS. Students have done a great job decorating their stands. I encourage all students to stop by Club Fair, enjoy the event and find ways to get involved at AUS.”

The Club Fair will continue until tomorrow, September 17, 2019.