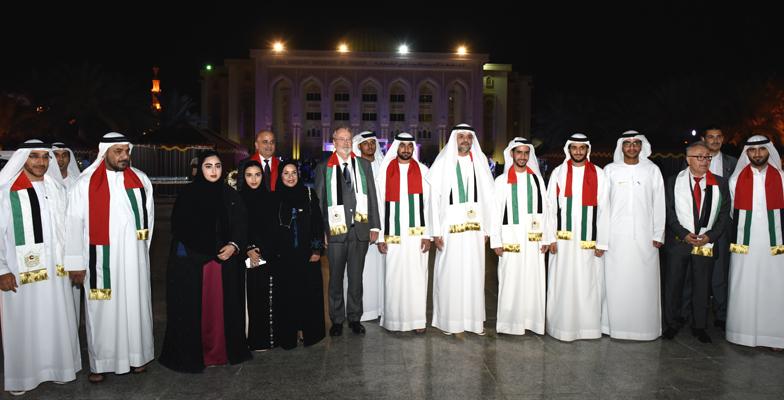 Organized by the Emirati Cultural Club, in collaboration with the Office of Student Affairs (OSA), the celebrations began with a live performance of the national anthem by a musical band from the Police Academy of Sharjah. His Excellency Sheikh Sultan visited the booths comprising the Emirati Heritage Village, which highlighted various aspects of Emirati culture and tradition. The celebrations also included a display of colorful UAE folk dances and songs. The AUS plaza was decorated with UAE flags and lights representing the national colors of the country.

Dr. Björn Kjerfve, Chancellor of AUS, congratulated His Highness Sheikh Khalifa bin Zayed Al Nahyan, the UAE President, and His Highness Sheikh Dr. Sultan and other UAE leadership and the UAE people on the occasion of the National Day. He expressed his pride in the efforts of the Emirati Cultural Club in bringing the heritage of the country and the region to the campus community.

Dr. Moza Al Shehhi, Dean of Students, thanked students of the Emirati Cultural Club for organizing the two-day event on campus and members of the AUS community for joining in the celebrations. She said:

“The National Day celebration is to celebrate the spirit of the nation, its people, and their efforts in etching an expression of happiness and living together with tolerance and amity. I thank the Emirati Cultural Club for putting together a host of activities on campus. In addition, I commend this year’s celebration theme 'The Sons of Zayed.' This theme is to inspire the attendees by showing what the new generation has accomplished.”

Sultan Al Tarifi, President of the Emirati Cultural Club at AUS, also congratulated the country’s leadership and said that by organizing these celebrations, Emirati students wanted to share the pride they feel in their country as well as to share its rich traditions and heritage with the many nationalities present on campus.