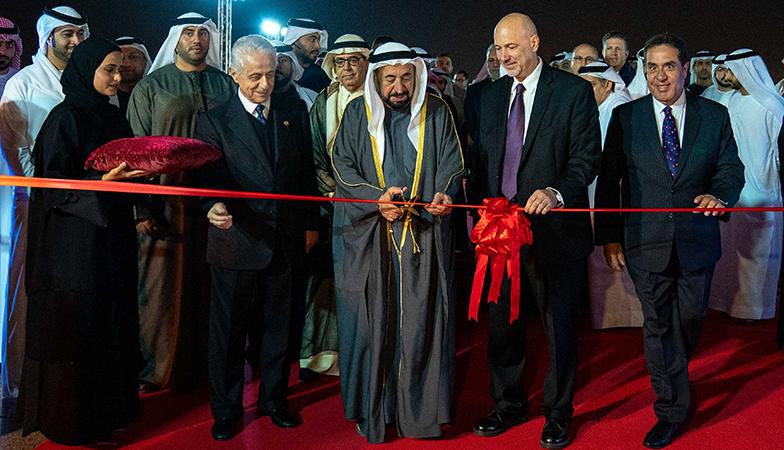 American University of Sharjah (AUS) is well on course with its progress and development as outlined in its strategic plan, said His Highness Sheikh Dr. Sultan bin Muhammad Al Qasimi, Supreme Council Member, Ruler of Sharjah and President of AUS, at the Thirteenth Annual Alumni Reunion held January 31 on the AUS campus.

Addressing the gathering which comprised of AUS alumni from all across the country, senior university officials, and prominent business leaders, the Sharjah Ruler spoke about the recent achievements and accomplishments of the university which included the opening of the new Engineering Science Building (ESB) that boasts multiple scientific and research laboratories. He also mentioned the establishment of the Sharjah Research Technology and Innovation Park that will include numerous research organizations and institutions linked to the university.

His Highness also noted that the university was keen to know how its alumni were doing in their careers and if they were on the road to success. He urged them to preserve the values, virtues and good morals they had acquired.

Sheikh Dr. Sultan concluded by thanking the AUS administration for being committed towards achieving the university’s strategic plans and for working towards its educational and academic values.

During his welcome remarks, AUS Chancellor Professor Kevin Mitchell thanked His Highness for his vision for the university and said: ”Due to the foresight and extraordinary vision of His Highness, AUS today is not only characterized by the incredible buildings that we enjoy due to his generosity, but the campus is much more – It is a diverse academic community enriched by members who contribute to the advancement of the mission of the university.”

Addressing the alumni, Professor Mitchell said: “When speaking with employers, the words I most often hear when describing AUS alumni are confident and capable. AUS alumni continue to distinguish themselves in their respective fields, and make an impact in business, industry, government, non-profit organizations, and in arts and culture. AUS has benefitted from the support of alumni during the past year, which has resulted in the establishment of a new alumni chapter in India and major contributions to the AUS Alumni Student Scholarship Fund.”

The theme for this year’s event was #creatinglifelongimpact, devised in recognition of the many notable achievements of the university’s alumni and to celebrate their accomplishments, reflect on the impact AUS had on their lives, create lifelong learning opportunities, and reinforce a common sense of belonging with their fellow graduates to the large AUS alumni family.

Over the years, AUS alumni have made a name for themselves in a wide variety of fields, including government service, business and finance, and the world of academia. Kateryna Kadabashy, an AUS alumna and a journalist with Arab News, highlighted the importance of the annual event and said: “Coming to the reunion makes me feel nostalgic, as if I’m going back to my time as a student. It gives me the opportunity to meet old friends and network.”

“I always felt I was fortunate to be taught by professors were very serious about their work. They trained and prepared us very well for the workplace. In fact, not a lot of things surprise me at work, even though it's my first job as a journalist, and all thanks to my professors!”

For the university, the alumni are an integral, enriching part of its community. Welcoming the hundreds of alumni present at the event, Charles A. Diab, Executive Director of Advancement and Alumni Affairs, said:

“This is what reunions are about. It is the time for you to come together to celebrate your accomplishments and the impacts you have created in your community and for our newest alumni, to network with their fellow graduates to possibly discover what opportunities may lie ahead.”

Diab also expressed his pride in the alumni who are dedicated to improving the AUS community and the community they live in: “You represent the fulfillment of the educational vision of His Highness, and we are proud of your remarkable achievements. His Highness' vision combined liberal arts with practical training so that you alumni could contribute to our communities as soon as you graduate.”

The evening also included interactive online games organized by ITL World with prizes going to three lucky winners, a fantastic fireworks display, a performance by the AUS choir and Moulla, a magician who mixes illusion with augmented and virtual reality.