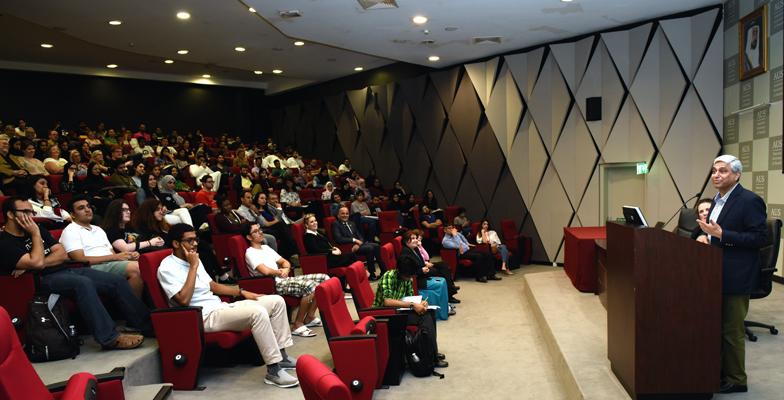 Multi-award winning author and Indian diplomat Vikas Swarup entertained a hall packed with students, faculty members and senior officials of American University of Sharjah (AUS) with anecdotes, jokes and writing advice during a lecture held at the university on November 1.

Speaking to the audience about his early days, Swarup recalled his passion for reading. “I was a voracious reader and would read anything I could lay my hands on.” He encouraged students and aspiring writers to read as widely as possible and to keep in mind the three Cs – namely, curiosity, confidence and computer – which, he believed, were essential these days in becoming a good writer. He also recollected how he wrote the first draft of Q&A, his most famous book, in a matter of two months, collecting research during the week after coming home from work and writing during the weekends.

Q&A went on to become Swarup’s most famous novel and was adapted into the film Slumdog Millionaire, which won eight Oscar awards in 2009. The novel has been translated into 43 languages and has topped the best-sellers charts across the world. Swarup has written two other novels, namely Six Suspects, which has been optioned for a film, and The Accidental Apprentice, which was made into a BBC Radio play.

Swarup, who is in the UAE as a guest of the Sharjah International Book Fair, is a diplomat by profession and currently serves as the High Commissioner of India to Canada and was formerly the official spokesperson of the Ministry of External Affairs of India. He has served in Indian diplomatic missions in Turkey, the United States, Ethiopia, the United Kingdom, South Africa and Japan.