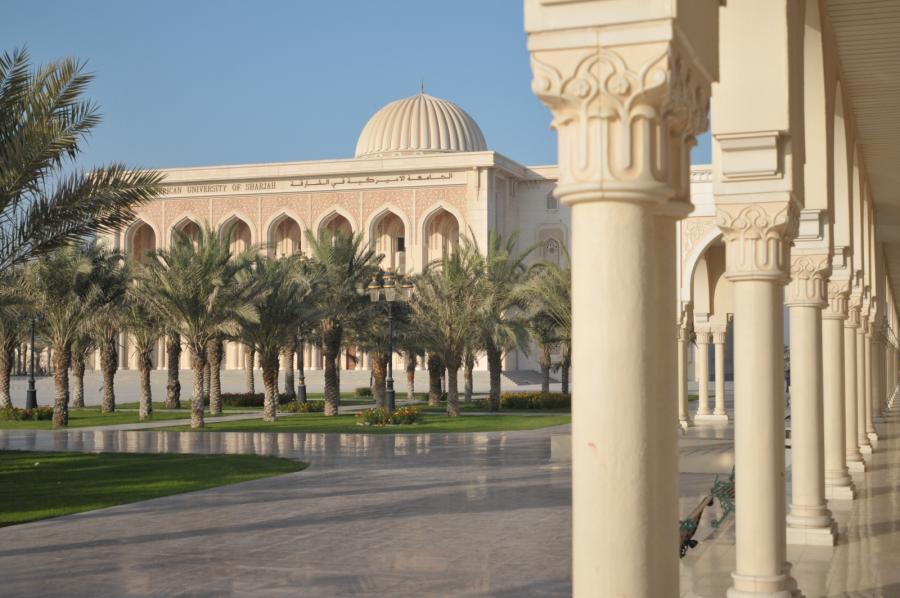 Students compete for top honors at the AUS Programming Contest

In a keenly contested competition, students vied to solve 10 challenging programming problems within the span of five hours at the AUS Programming Contest held recently at American University of Sharjah (AUS).

The annual competition has been organized by the Department of Computer Science and Engineering (CSE) since 2001 and is open to AUS undergraduate students from all disciplines. Students were judged based on the highest number of problems they were able to solve correctly within the allocated time with the least number of attempts.

Ashith Farhan, Rohan Mitra, Sabbir Alam and Ahmed Sharafath and were announced as this year’s winners.

“I took part in the contest because I love coding and solving problems, which is exactly what a programming competition is all about. It felt great to win, and it was honestly a great learning experience. I ended up solving eight problems out of 10 which is not a bad score at all. The problems ranged from mathematical ones to those based on real-world issues. To be honest, even if you solve zero problems, you gain a lot of knowledge and learn to think about things differently by just participating,” said Farhan, a third-year computer engineering major.

Mitra, a double major in computer science and mathematics, had to juggle various commitments to take part in the competition, and yet emerged a winner.

“I had a midterm and a presentation at the AUS Regional Student Conference on Mathematics during the competition. This left me with about two hours out of the five to solve the programming problems! However, I managed to make the most of it and solved eight out of the 10 questions. I was about to submit my solution for the ninth question as well but ran out of time. Looking back, and regardless of how hectic my day was, I managed to put my experience and skills to the ultimate test of winning a university-level programming contest in less than half the time!” he said.

Putting his programming skills to the test and having an enthusiastic and spirited competition with fellow students were the main reasons for Alam’s decision to compete for a second year in this contest.

“I love programming contests because they are a fun way to apply what I have learned. The stress when my solution doesn't work, the relief when it finally does, and checking the leaderboards every 10 minutes to see where I stand in real-time among my peers are all part of my definition of ‘fun’,” said the computer science major.

There was a lot of trial and error for Alam during the contest, which he found rewarding and very educational.

“Every time your solution to the problem is wrong, you receive penalty points. It was challenging because you only know a question’s level of difficulty once you start working on it. While five hours may seem like a long time, some solutions took quite a while to program (some close to 30 minutes to an hour). Also, you may submit a solution thinking that you are done, but instead it gets marked as incorrect, prompting you to go back to figure out what is wrong. While the whole process may seem stressful, it is really rewarding to write well-thought-out solutions, especially when you get that sense of accomplishment from submitting a correct solution,” said Alam.

For computer engineering major Sharafath, the contest taught him to persevere in the face of challenges.

“This is my first year at AUS. My biggest challenge was using a programming language that I had very basic knowledge of as it is a course I am currently taking at AUS. Also, the platform was not one I had ever used before and it was quite nitpicky about our code submissions, which was a bit frustrating! I wanted to throw in the towel because I thought I wasn’t going to win based on the scoreboard. But I am very glad I stuck to it and kept pushing! I ended up solving seven problems out of 10 and I won the first place in the category of first-time competitors,” he said.

Speaking about the contest, Dr. Dhou said: “The programming contest is a fun and exciting event. It helps the participants improve their problem-solving and programming skills. Training sessions are provided during the semesters in preparation for this contest and others in the region and internationally.”

The AUS Department of Computer Science and Engineering offers bachelor of science degrees in computer science and computer engineering, as well as a master of science degree in computer engineering. The department boasts state-of-the-art laboratories, highly qualified faculty and a multicultural student body. Its curriculum focuses on the needs of the region's dynamic marketplace and is constantly evolving in view of any technological advancements that serve the UAE and wider world community. The department currently has around 730 students and more than 1,000 alumni. For more information, please visit www.aus.edu/cen/department-of-computer-science-and-engineering.