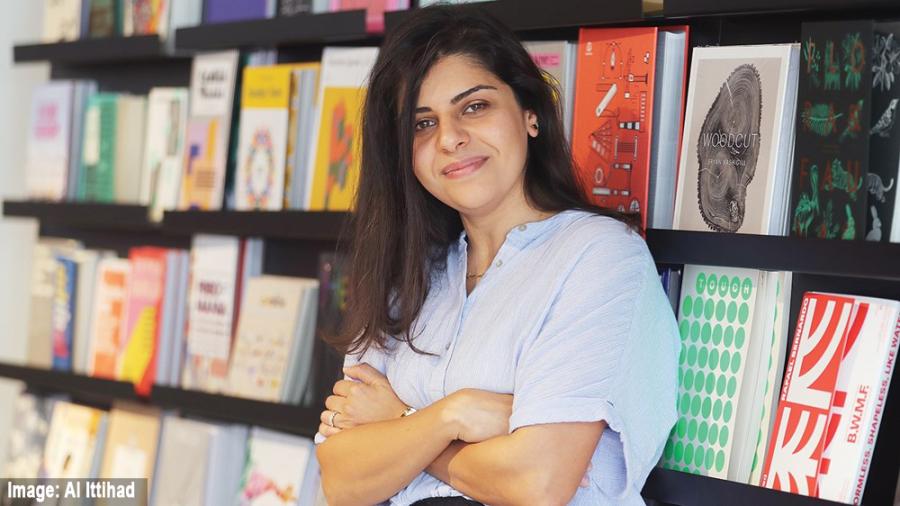 The heart behind the UAE’s new niche design bookstore, HOBB

Situated in the heart of Dubai’s Al Wasl Square is an independent bookstore owned by an entrepreneur with a big heart. HOBB, which means “love” in Arabic, was founded by designer and American University of Sharjah (AUS) alumna Haifa Malhas, who wanted to give designers and design-lovers access to a broader range of design and visual culture literature.

As a visual communication graduate from the UAE’s leading design institution, AUS’ College of Architecture, Art and Design (CAAD), Malhas’ decision to open HOBB came after years of hunting down design books that were often displaced in bookstores between the art and marketing sections. Funded, managed and curated by Malhas through her freelance work as an art director, HOBB first launched as an online store in February 2021 (HOBB.ae) and then as a physical store in Jumeirah in June 2022, where she continues to work both as a designer and bookseller.

“I’ve always believed that we, as designers, must educate alongside our craft. That it is our responsibility—to spread visual and creative literacy, and to make design more accessible to others,” said Malhas.

Malhas originally enrolled at AUS with the intention to pursue a career in animation, studying multimedia design at CAAD. However, during her first year of studies in the college’s Foundation Program, she decided that visual communication was a better fit, and threw herself into her studies.

“Attending classes at AUS and living on campus offered me the opportunity to be completely immersed in my education as a young designer, with a new-found love for English literature, while still being close enough to fly home on the holidays,” she said.

Malhas also worked as a teaching assistant to the late Palestinian-Kuwaiti photographer and educator Tarek Al-Ghoussein, who taught at AUS for 16 years. This experience has heavily influenced her approach to work.

“I learned that it is important to contribute to the environment that you are in. It is not enough to gain knowledge, but one must also give back. I will always be grateful for that opportunity. Professor Tarek (may his soul rest in peace) held his students and assistants to a high standard of work and will always be greatly missed,” she said.

After graduating in 2007, Malhas returned to Kuwait to work as an animator and motion graphics designer in a production company as they expanded into advertising. She came back to the UAE at the end of 2010 and was impressed with how rapidly the creative industry was growing.

“Many of my fellow CAAD graduates had to learn on the job as design and visual culture grew immensely in the last decade, in order to keep up with its speed and growth,” said Malhas.

“When I look at today’s CAAD graduates and the opportunities available to them in the region, I believe that my generation has helped pave the way for them—and they will pave the way for the ones to follow. I feel that CAAD students today are fortunate to be taught by AUS alumni with relevant cultural and field experience, as much as they are fortunate to be taught by CAAD’s international faculty,” she said.

As an entrepreneur, Malhas said AUS helped her become more independent and outspoken.

“Our courses at CAAD were all about presenting concepts, discussing them with our professors and peers, and learning to take criticism well and use it to develop better ideas,” she said.

“Many of us, myself included, allow our own fear to stand in the way of our success. My first attempt at HOBB failed, which was my biggest fear back then. But with time, I realized that it was not the end of the road. I recovered financially and mentally, and relaunched the concept with better resources,” she said.

“I am humbled by the support I have received from AUS alumni, faculty and students. When starting a small business with such a niche market, there is an overwhelming amount of hard work mixed with doubt, so the support really makes a difference,” she said.

For more information about the College of Architecture, Art and Design at American University of Sharjah, visit www.aus.ed/caad.