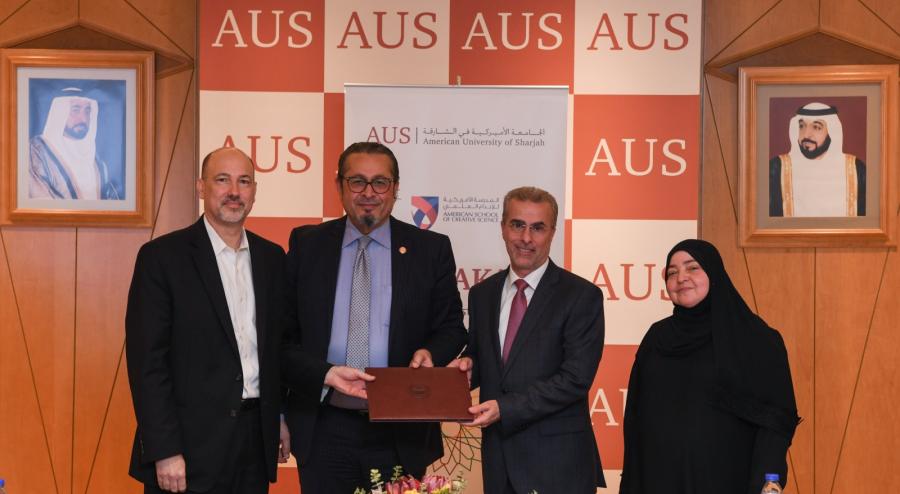 American University of Sharjah (AUS) signed a Memorandum of Understanding (MoU) with American School of Creative Science (ASCS) in Muwaileh, as part of the university’s popular Sharakah program. The agreement, which was signed at a special ceremony held on campus on October 9, was attended by a number of senior officials including AUS Chancellor Professor Kevin Mitchell. The AUS Sharakah program is a strategic initiative of the university’s Office of Enrollment Management with selected schools from around the country.

Ali Shuhaimy, Executive Director of Enrollment Management at AUS, and Majd Hussein, Principal of ASCS, signed the agreement on behalf of their respective institutions.

Commenting on the university’s relationship with ASCS and the MoU, Shuhaimy said:

“While ASCS is a relatively new school, we already have 40 students enrolled at AUS. Of these, 23 joined us this year, with 19 receiving scholarships. We are very happy with our partnership with ASCS and look forward to seeing more ASCS students participating in the many upcoming AUS events.

“One component of this MoU allows us to share feedback on student performance with the school in order to help it tailor its teaching. I know that ASCS is adopting a technological approach to teaching, is recognized by Promethean as the only Centre of Excellence in the Middle East, and is fully accredited by the New England Association of Schools and Colleges (NEASC),” he added.

Speaking on the occasion, Hussain said:

“We are excited to be signing this agreement. Our school is close to AUS and our students are always interested in the events taking place here. They have been participating in many of the university activities such as the Model UN. It is important for us to know what the university is looking for in the students it admits as that would help us work together and provide good prospective candidates. We are instilling a sense of leadership in our students at ASCS and we want them to take that quality with them to university and to the community at large.”

Including high schools students in events at the university level gives them an air of confidence prior to admission. Khalfan AlShamsi, an ASCS graduate and freshman in computer engineering, feels his performance in school has paved the way for his anticipated success at AUS:

”ASCS helped me become a better leader, a better team player, and a better learner. These skills have been the most crucial for life at AUS.”

Another ASCS graduate, Amna Juma AlGhawi, a sophomore in design management, said that she hopes to use the skills gained at the high school level to create a smooth transition into AUS:

"ASCS has encouraged my love for the arts and made sure I had the right guidance in order to select a major that would match my passions and at AUS, I am able to pursue it."

The agreement highlights the university’s role in the recruitment of outstanding students from varied socio-cultural and economic backgrounds. According to the MoU, AUS will provide partial scholarships to deserving students nominated by the school. It will also offer patronage of selected research, cultural, social, and sporting events organized by the school, in addition to organizing workshops for the school’s faculty and staff.