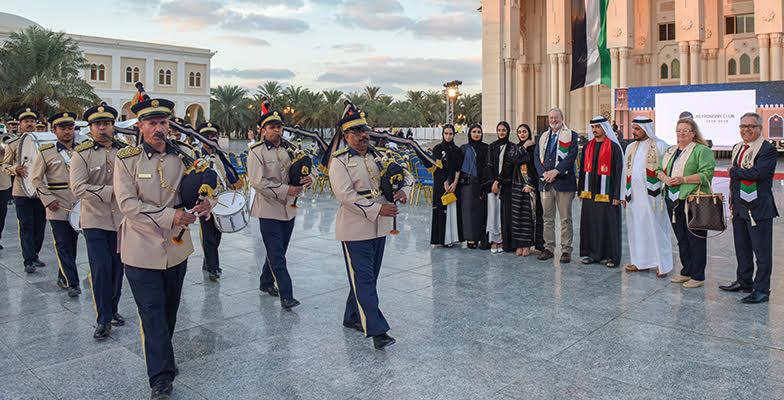 The event, which featured a number of folkloric activities, opened with the national anthem played by a military band followed by a short parade. Visitors then had the opportunity to walk around the AUS Plaza to visit the Heritage Village, which featured traditional Emirati food like luqaimat, as well as a henna designer and artist whose corner was full of interested visitors. Visitors could also learn about the UAE’s space endeavors and vision at the space pavilion, as well as enjoy the performances of the UAE music and dance band Al-Mazyoud.

“Today we celebrate our identity, security and stability. We also pay tribute to the vision of the late Sheikh Zayed Bin Sultan Al Nahyan, Founder of the UAE. This day is a reminder of the past challenges we have overcome and the difficulties our ancestors endured. We are celebrating the achievements we have made, which is a great blessing,” said Mohammed Khaled Al-Midfa, President of the UAE Cultural Club and organizer of the event.

“We are very proud of the achievements we have made in the field of space science, especially with the launch of Khalifa-Sat. The AUS Astronomy Club helped us a great deal in setting up the space pavilion,” added Al-Midfa.