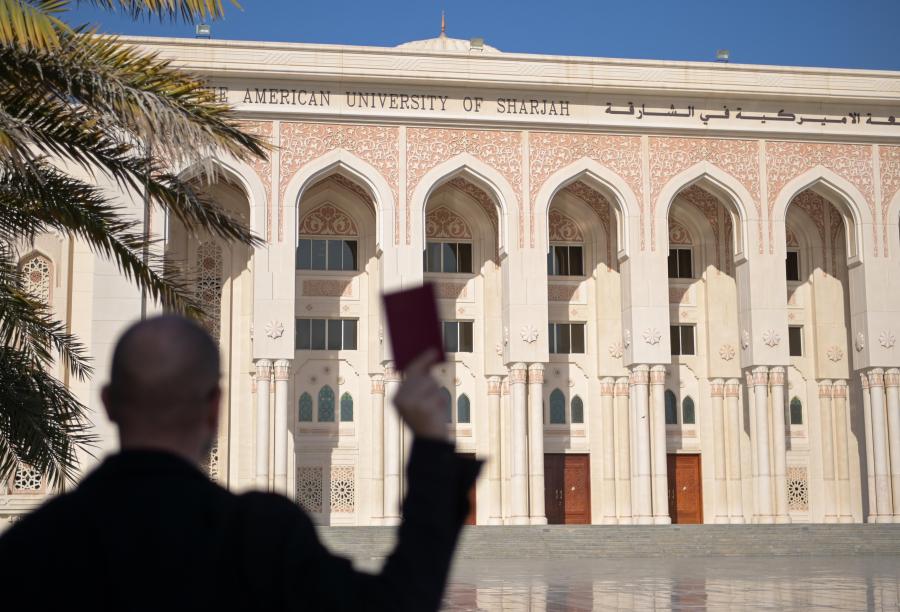 American University of Sharjah (AUS) is home to numerous scientists, designers and researchers whose international and national influence have earned them the UAE Golden Visa under the category of talented scientists and specialists.

Part of the UAE’s efforts to nurture and retain talent to further strengthen its position as a preferred destination for living, working and investing, the UAE Golden Visa offers long-term residence and is issued for five or ten years. It is part of a comprehensive framework that allows the country to develop policies to attract talent from all over the world.

More than 30 AUS researchers and artists have either been nominated or are current holders of the UAE Golden Visa, which is a testament to the exceptional caliber of the university faculty and to the UAE’s supportive environment that allows them to expand on their work and excel.

Dr. Ghaleb Al-Husseini, Professor in Chemical Engineering and Dana Gas Chair in Chemical Engineering at the College of Engineering, was among the 20 scientists who were the first to become golden visa holders in 2019. Dr. Al-Husseini is leading a team of researchers at AUS who received a US patent last year for a chemotherapy platform that uses minute capsules to target cancerous cells while bypassing healthy cells, thus reducing the treatment’s adverse effects.

“The golden visa is an excellent way to recruit and retain talent. The fact that I have a golden visa allows me to think long-term. As you know, research in the biomedical field takes a long time to make it into clinics. For instance, for a medication or a drug delivery platform to get Food and Drug Administration approval, it has to go through several stages including synthesis and characterization, in vitro work, in vivo (animal) experiments and clinical trials. All these experiments and validations may take 10 to15 years to complete. A long-term visa will allow for biomedical inventions to see the light. A long-term visa provides stability and ownership,” he explained.

Dr. Ghaleb added: “The fact that several faculty members and talented students have been granted this prestigious visa attests to the strong potential present at American University of Sharjah. AUS recruits strong talent for its faculty, undergraduate and graduate students.”

Juan Roldan, Associate Professor in Architecture at College of Architecture, Art and Design, was also awarded the golden visa based on a nomination from Dubai’s Future Foundation.

He saw the visa as an acknowledgement of his work and the educational field he is in. He said: “Being granted a golden visa is such an honor and privilege. It makes me especially happy as it acknowledges the education and design fields as part of this national initiative. It also recognizes the work done over the last eight years in and outside AUS as part of the interior design program.”

For Dr. Mohammed Al-Sayah, Professor in Biology, Chemistry and Environmental Sciences at the College of Arts and Sciences, the golden visa will allow him to expand further on his research, particularly his recent work on biomarkers for cardiac muscular damage. Dr. Al-Sayah will be spending his sabbatical leave this semester at MIT working on applying the developed technology for the diagnosis of COV-Sars-2 biomarkers and for drug delivery systems of antibiotics.

“UAE aims to develop a knowledge-based economy where people of high talent and innovation are pivotal for its success. Hence, granting golden visa for AUSers is a testament of their caliber and high potential to contribute to UAE’s success. I believe that we can expect to see an increase in innovation-based start-up companies from recent graduates of science and technology,” he said.

With the UAE’s roadmap for the next 50 years focused on accelerating national economic development, Dr. Zaher Zantout, Professor in Finance, said that the golden visa facilitates the UAE’s endeavors in becoming a global leader in international finance, noting the central role of academia to the process.

Along with his research partners at AUS, Dr. Zantout is currently looking into the progress of finance as an academic field and its impact on the country’s efforts towards building a knowledge economy, which is particularly important since AUS launched its doctoral program in business administration, with a concentration in finance.

“AUS’ faculty and graduates have been periodically receiving various forms of recognition for their great achievements and contributions to society. Competition for talent in the knowledge-based economy is intense, and I am very happy to be contributing through my profession to the success and progress that the UAE and the GCC region are experiencing,” said Dr. Zantout.

With plans to introduce new doctoral programs and establish more research initiatives to promote graduate studies and knowledge creation at AUS in alignment with the UAE’s plans to build a knowledge-based economy, Dr. Mohamed El-Tarhuni, Vice Provost for Research and Graduate Studies and Professor in Electrical Engineering, said that receiving the golden visa is a humbling recognition of his contributions to the higher education sector in the UAE.

“Having a long-term visa arrangement provides stability and allows for long-term planning and contribution to the building of talent and capacity that creates change in the community and organizations both locally and globally. Stability in the higher education sector is very important as knowledge creation, dissemination and implementation require time and continuity that will be supported with the golden visa,” he said.

Dr. El-Tarhuni added: “AUS attracts highly qualified faculty members from around the world who are known for their expertise in different fields. With the golden visa, many of these faculty members will have long-term plans to stay in the UAE and will have a greater impact on the development of human capital that will drive towards a more sustainable economy. AUS has also an exceptional alumni base who would be retained in the UAE through the golden visa.”