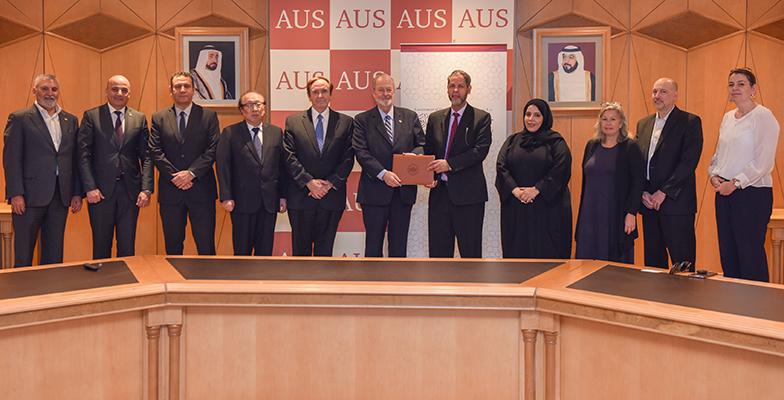 To establish and enhance cooperation and collaboration, American University of Sharjah (AUS) and the Arabic Language Academy in Sharjah signed a Memorandum of Understanding (MoU) at a special ceremony held today, Thursday February 14, at the AUS campus.

The agreement, which was signed on behalf their respective institutions by Dr. Björn Kjerve, Chancellor of AUS, and Dr. Mohammed Safi Al Mostaganim, General Secretary of Arabic Language Academy, aims to provide a framework of cooperation and facilitate collaboration between the two institutions in areas of mutual interest.

The MoU envisages AUS and the Arabic Language Academy cooperating in a number of areas including promoting collaborative, non-credit bearing Arabic language learning programs for AUS faculty, staff and students; enabling cultural, educational and language programs between the two institutions; as well as facilitating joint research.

“We are pleased to be signing this MoU with Arabic Language Academy. AUS is committed to enhancing its ties with institutes such as the Arabic Language Academy in order to collaborate in areas of mutual interest. We have a highly-qualified faculty that can play an important role in strengthening such partnerships that aim not only to serve academia but also the community at large.”

Secretary General of the Arabic Language Academy, Dr. Al Mostaganim, also addressed the gathering. He said: “We want to thank American University of Sharjah and all those involved for this opportunity. We look forward to working together and achieving success in all our academic and scientific endeavors to serve students and the AUS community.”

The signing ceremony was also attended by senior officials from both institutions.