First-of-its-kind study on one of the UAE’s largest, oldest and most diverse ecosystems | American University of Sharjah
Skip to main content
S 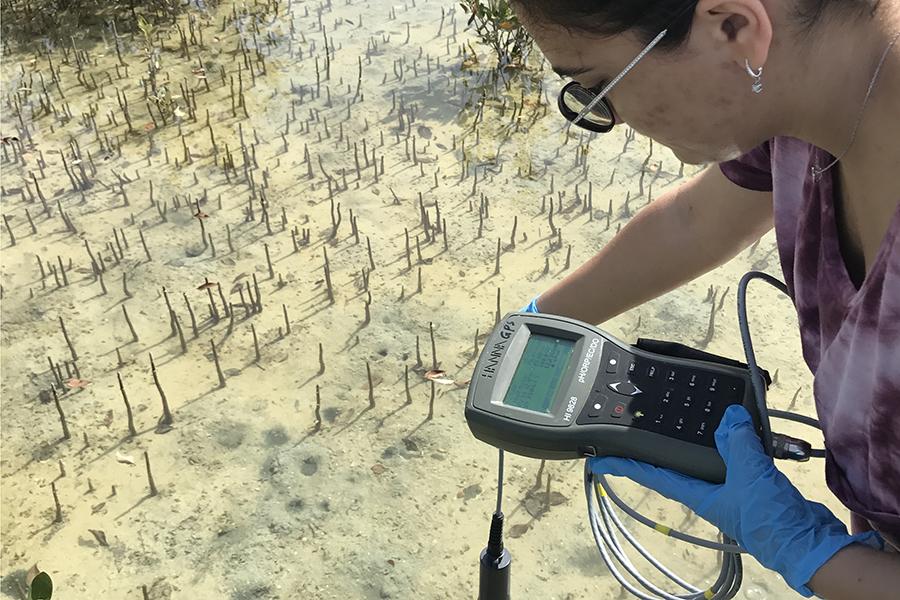 First-of-its-kind study on one of the UAE’s largest, oldest and most diverse ecosystems

The Khor Al-Beida mangrove forest of Umm Al-Quwain, the breeding ground for the largest colony of the Socotra Cormorant bird in the Gulf region, has been deemed healthy and relatively undisturbed by human activity, according to a first-of-its-kind study conducted recently. Despite being one of the UAE’s largest, oldest and most genetically diverse ecosystems, relatively little is known about the country’s mangroves and their vulnerability to human behavior.

The interdisciplinary research project was conducted jointly by American University of Sharjah (AUS), Sharjah Higher Colleges of Technology, University College London and the Kuwait Institute for Scientific Research. Dr. Fatin Samara, Associate Professor of Biology, Chemistry and Environmental Sciences at AUS, and a member of the research team, said that the current ecological status of these areas is still virtually unknown. “To be able to establish a baseline study is important to ensure minimal impact in the future. Mangroves are tropical forest ecosystems that occupy shallow water near the shore and adjacent land. They are highly diverse and productive systems and are especially important to the desert natural community of the Arabian Gulf where they form local biodiversity hotspots.”

In the context of global climate change, mangroves play a paramount role in protecting the UAE coast from the effects of rising sea levels and increasingly frequent storms. They also act as a carbon reservoir or “sink,” stopping carbon from entering the atmosphere as carbon dioxide—a major contributor to climate change. Mangroves are also an important source of the region’s biological diversity. With the site playing such an important environmental role, it is reassuring that the research has found little evidence of damage to the mangroves.

Two significant factors considered during the study show that the forest is currently healthy. These include low levels of trace metals and the presence of diverse algae groups.

“The results of this study show that there are slightly elevated levels of certain trace metals such as zinc in water and aluminum and iron in sediments, but the water quality parameters appear to be within the normal ranges for this part of the Gulf. These metals occur naturally at very low concentrations but can turn into a health hazard if found at high concentrations, which normally signals man-made pollution. The good news is that the concentrations of most trace metals are low at Khor Al-Beida,” explained Dr. Samara.

The study also identified 53 algae groups in the Al-Beida sediment—a level of diversity that usually indicates a healthy ecosystem. “These algae groups form the basis of the sea’s food chain, and the high variety of these species is an important sign of ecosystem wellbeing. These algae are sensitive to pollution, so a reduced abundance or diversity would suggest ecosystem disturbance,” Dr. Samara said.

“Such assessments provide information about past impacts on mangroves as well as ideas on how to conserve the ecosystem. More research is needed into mangrove biodiversity, as mangroves are biodiversity hotspots in the Gulf and host a wide variety of birds, insects, crustaceans and fish. We look forward to being at the forefront of such research over the coming months,” added Dr. Samara.