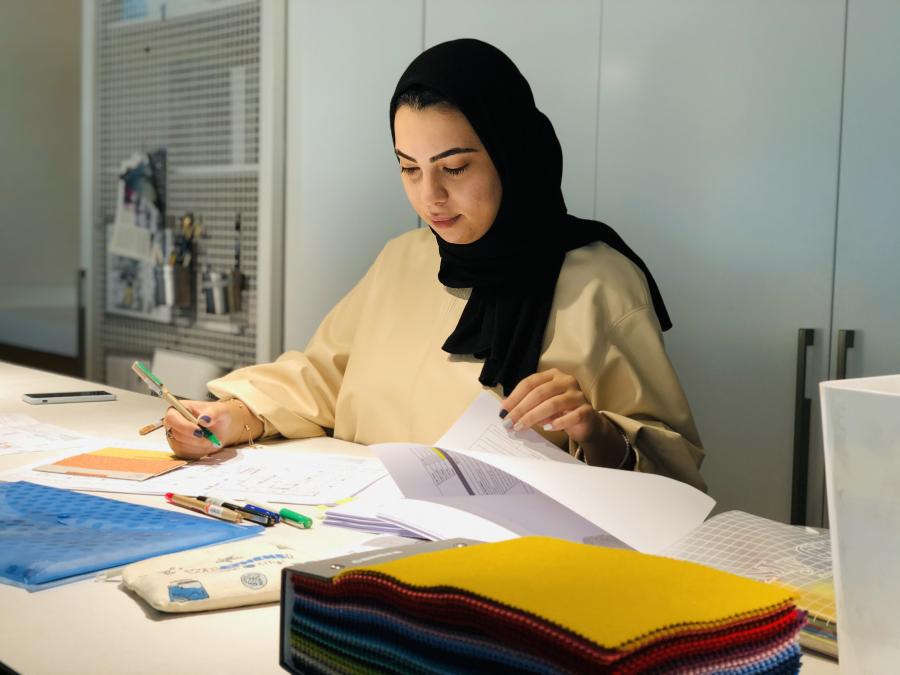 ElFeki was nominated for her work on standout commercial projects including offices for Gastronomica, Evoteq, Takeda HQ and the Sharjah Research, Technology and Innovation Park as a member of highly acclaimed boutique firm Roar, founded and led by AUS alumna Pallavi Dean. The firm and its founder received two CID nominations of their own in the categories of Interior Design Boutique Firm of the Year and Interior Designer of the Year, respectively.

“With these projects, I was involved in the design process all the way from concept to completion. It is important to have a strong concept or idea, but it is also equally important to be able to execute these ideas. With Roar, I’ve learned how to turn a strong concept into a finished project,” said ElFeki.

ElFeki was introduced to Dean through an internship while studying at CAAD and went on to spend one year in London studying for a Master of Interior Design at Kingston University while working with Roar’s international clients.

“CAAD prepared me to embrace different challenges, one of which is designing outside my comfort zone. As for my experience in London, it was interesting to go through the diversity of working with a group of people from various cultures. These included the team of academics at Kingston University and design professionals who have a unique work culture. Given my experience at CAAD, I was able to overcome any challenge I faced,” said ElFeki.

Supported by Dean and the Roar design team, ElFeki hasn’t let the challenges of 2020 stop her, drawing from the skills she learned at CAAD to adapt and explore new ideas and concepts that break the norm.

“Just like the world evolves, we have to grow and change our approach. At CAAD I learned how to experiment and figure out my strengths and weaknesses. The studio-based curriculum helped me acquaint myself with the design industry before going out and practicing interior design. It was a realistic setup which prepared me for the practical work experience.

“The CID nomination is one of the major milestones I hoped to achieve following my graduation from AUS in 2016. I am grateful to have this exposure by being shortlisted. I am grateful for the constant support of my mentors Associate Professor Juan Roldán and Pallavi Dean,” she said.

Also recognized at this year’s CID awards is Hamama, an installation at Dubai residential complex Belgravia II created by interior design students Sana Fathima, Rima Chalha, Priyanka Soni and Mariam Al Juwaied, along with photographs by multimedia design student Aisha Abdulaziz. Hamama was commissioned by Ellington Properties and is nominated for the CID Interior Design of the Year – Residential award. The project has also received regional acclaim at the Harper’s Bazaar Arabia Interior Design Awards earlier this year and has paved the way for the brand new Ellington Art Foundation Design Competition for which Roldán will be juror.

The Commercial Interior Design Award winners will be announced on November 25 at a ceremony in Dubai. For more information about the nominees from CAAD, visit https://www.commercialinteriordesign.com/events/cid-awards.

For more information about the outstanding students, alumni and faculty of the College of Architecture, Art and Design at American University of Sharjah, visit www.aus.edu/caad