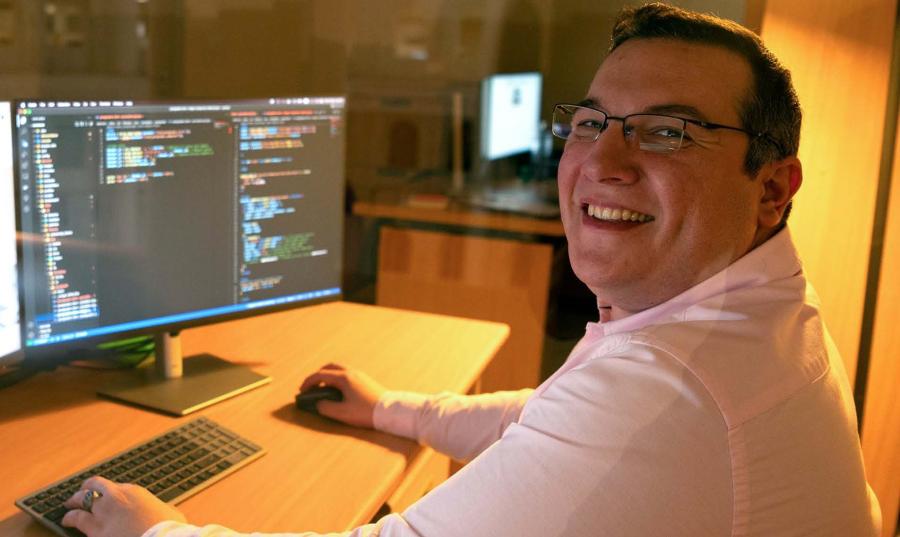 American University of Sharjah’s (AUS) alumnus Majed Al-Chatti has been selected as one of seven Platinum Coding Ambassadors to help champion the UAE’s digital drive as part of the CodersHQ initiative.

The initiative supports coders who work as strategic enablers to the UAE digital economy. Fifty-six coding ambassadors were selected from around the UAE and grouped under three tiers—silver, gold and platinum—based on experience. The ambassadors will have the opportunity to enhance their skills in coding, public speaking and lead projects. They will be central to the vision of the National Program for Coders launched in June 2021 by His Highness Sheikh Mohammed bin Rashid Al Maktoum, Vice President and Prime Minister of the UAE and Ruler of Dubai. The program is overseen by the Office of  His Excellency Omar Sultan Al Olama, Minister of State for Artificial Intelligence, Digital Economy and Remote Work Applications.

“After all my years of work in technology, I have reached a point where I wanted to be part of something bigger and have a positive impact on the world. The UAE government is doing amazing work by focusing on technology and coding. This is an initiative that supports coders and developers at all experience levels, from students to seasoned professionals. It is a privilege to be part of a big initiative like this. I am proud to be selected as a Platinum Ambassador, especially because I am interested in meeting like-minded experts to share knowledge and leave a positive mark in the world,” said Al-Chatti, who is currently working as a Web Architect at AUS.

As part of his work as a Platinum Ambassador, Al-Chatti is currently leading the development of one of three open-source projects that are integral in the CodersHQ roadmap, as well as other auxiliary projects, events and workshops.

A holder of a Bachelor of Science in Computer Science from the AUS College of Engineering (CEN) (2006) and a Master of Science in Information Technology (Information Security) from the University of Liverpool (2011), Al-Chatti’s career spans more than 15 years of work in information technology (IT) and programming in the UAE and Kuwait. From a student worker supervising computer labs and assisting students with their computer science projects at AUS, Al-Chatti began his career after graduation as a technology support engineer with Naseej for Communication and Information Technology in Kuwait. He later returned to the UAE, joining AUS as an IT Specialist then promoted to Web Services Engineer, where he built and managed intranet applications and the public IT knowledge base. Later on, Al-Chatti joined AUS’ Office of Strategic Communication and Marketing as Web Architect where he is managing the website, student recruitment portals and marketing platforms.

Al-Chatti credits his wife and AUS alumna Alaa Al Naboulsi, who is currently Student Leadership Development Officer at AUS, for encouraging him to apply to the CodersHQ initiative.

“Throughout my career, I have tried to connect with people who share similar tech interests and who were passionate about coding. When the CodersHQ initiative was announced, it was my wife who brought it to my attention. She encouraged me to apply, and I did, and it felt exciting,” said Al-Chatti.

He went on: “Next thing, I was called for a meeting, and I went through the selection process in April. In August, I received a lovely email informing me that I was selected, and in September I started.”

Reflecting on the role his AUS education and experience played in his life, Al-Chatti said he has always had a passion for computer science, which he was able to nurture at AUS.

“What encouraged me to join AUS was the nature of courses and caliber of professors. I was privileged to learn from Dr. Kassem Saleh, who answered all my questions and gave me his full attention no matter how complicated my inquiry was. Dr. Jalal Kawash challenged and pushed me to grow beyond my comfort zone. Dr. Gerassimos Barlas taught me about Linux, open-source operating systems and how to leverage technologies to achieve amazing feats. Dr. Jasser Auda taught me about neural networks, which has now evolved to machine learning and changed the way we approach technology. Also, since AUS offers a multidisciplinary and holistic education, I have learned a lot from faculty members in other colleges such as Dr. Fatima Badry, who taught me public speaking. Dr. Nawar Golley and Dr. Ahmad Al-Issa taught me to go beyond technology into research, debate and knowledge acquisition. AUS has amazing faculty members who gave me a foundation upon which I was able to build and become who I am now,” he said.

Al-Chatti added: “A challenge is a learning opportunity; failure is a lesson. Don’t be afraid to take the first step no matter how small it is.”

AUS offers bachelor’s degree programs in both computer science and computer engineering, along with a master’s degree in computer engineering. The programs are designed to provide students with a strong base that will enable them to capitalize on the increasing career opportunities in the information technology sector. The programs also aim to expand the limits of students’ knowledge and enable them to explore innovative approaches to computer-related problems. AUS is ranked among the top three in the UAE and top ​500 universities globally for ​computer science and information systems, according to QS World University Subject Rankings (202​2​).

For more information about these programs, please visit www.aus.edu/cen/bscoe.