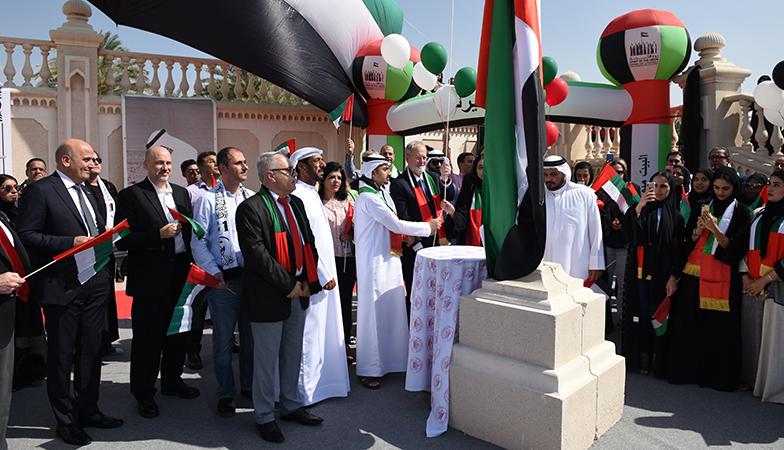 American University of Sharjah (AUS) celebrated UAE Flag Day in a special ceremony on campus as part of the countrywide celebrations held to mark the occasion. The event was organized by the Office of Student Affairs and the AUS Emirati Cultural Club as a show of unity, patriotism and loyalty to the UAE, and in solidarity with the values of the union established by the country’s founding fathers.

The flag-raising ceremony was attended by Dr. Björn Kjerfve, Chancellor of AUS, senior university officials, and a large crowd of students and members of the campus community.

“Not only are we celebrating our unity and patriotism, but we are celebrating the flag that was raised by Sheikh Zayed bin Sultan Al Nayhan, Founder of the UAE, on December 2, 1971. The flag of the UAE represents who we are as a people and we are all united under its colors,” said Mohammed Khalid Al Midfa, President of the Emirati Cultural Club.

“We raised the flag at 11 a.m. in line with the celebrations being held around the country. After the ceremony, we proceeded to the AUS Student Center where we have small cards in the colors of the flag on which people are invited to write down their thoughts and wishes. These will be placed together to form the flag of the UAE,” he added.

Students Asma Al Meer, Hind Al Habtour and May Lootah noted that their participation in the event reflected the sense of pride they feel in the achievements of their country. “This land was once a desert and look what it has become now. Our participation today is in recognition of all the achievements of this country and a way to express our pride and gratitude,” they said.